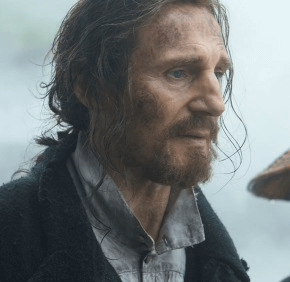 NEW YORK – Directed and co-written (with Jay Cocks) by Martin Scorsese, “Silence” (Paramount) is a dramatically powerful but theologically complex work best suited to viewers who come to the multiplex prepared to engage with serious issues.

Those willing to make such an intellectual investment, however, will find themselves richly rewarded.

In adapting Catholic author Shusaku Endo’s 1966 fact-based historical novel, a project in the works since the late 1980s, Scorsese finds himself in what might be called Graham Greene territory. As fans of that British novelist know, he had a fondness for stretching and twisting fundamental issues of faith and morality, and Endo’s plot shows the same tendency. So this is also not a film for the poorly catechized.

The movie’s primary setting is 17th-century Japan, where persecution is raging against the previously tolerated Christian community.

Shocked by rumors that Christavao Ferreira (Liam Neeson), their mentor in the priesthood, has renounced the faith under torture, two of his fellow Jesuits, Sebastian Rodrigues (Andrew Garfield) and Francisco Garrpe (Adam Driver), volunteer to leave the safety of Europe for the perils of the Land of the Rising Sun. Their twin goals are to find their role model and to minister to the underground Japanese church.

What follows is a long, sometimes harrowing battle between doubt and human frailty on the one hand and fidelity on the other. Earthly compassion is set against faithfulness and an eternal perspective, with both divine and human silence contributing to the appropriateness of the title.

Scorsese has crafted an often visually striking drama that’s also deeply thought-provoking and emotionally gripping. And the performances are remarkable all around. But the paradoxes of the narrative demand careful sifting by mature moviegoers well-grounded in their beliefs.

Those lacking such a foundation could be led astray, drawing the conclusion that mercy toward the suffering of others can sometimes justify sin. While Catholics who are blessed with the freedom to practice their faith in peace are hardly in a position to judge those facing martyrdom, the principle that circumstances can mitigate guilt but not transform wrong into right remains universally valid.

In the end, “Silence” movingly vindicates a certain form of constancy. That may, in a roundabout way, match the historical record: There is edifying, though inconclusive, evidence that the real person behind one of the three main characters in the picture not only rejected his previous apostasy, but ultimately surrendered his life for the faith.

The film contains religious themes requiring mature discernment, much violence, including scenes of gruesome torture and a brutal, gory execution, as well as rear and partial nudity. The Catholic News Service classification is L – limited adult audience, films whose problematic content many adults would find troubling. The Motion Picture Association of America rating is R – restricted. Under 17 requires accompanying parent or adult guardian.