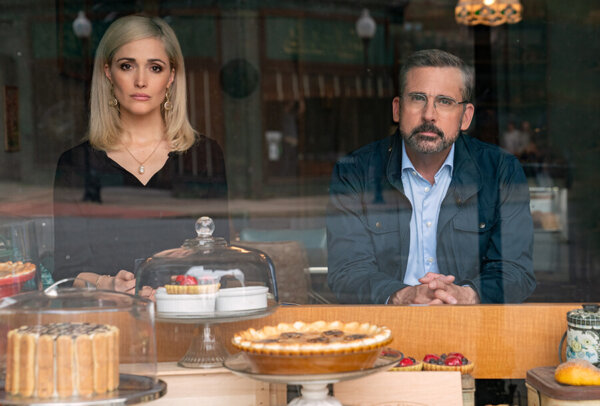 NEW YORK (CNS) — While it may not be all its title promises, TV comedian-turned-writer-director Jon Stewart’s clever political satire “Irresistible” (Focus) is certainly appealing.

Though couched in terms that put it off-limits for youngsters, his lampooning of both the cynicism underlying our current electoral system and the cultural divide separating the coasts from the heartland will likely amuse most grown-ups.

As the town council in his small, cash-strapped Wisconsin farming community prepares to pass legislation that would adversely affect immigrants without legal papers who live there, retired Marine Col. Jack Hastings (Chris Cooper) delivers an impassioned speech opposing the measure. A video of his address comes to the attention of high-powered Democratic Party strategist Gary Zimmer (Steve Carell), who is duly impressed.

Seeing in Jack a figure whose values could transcend the endless bickering of left and right, and thus blaze a trail of success for the Democrats, Gary travels to the Badger State to convince him to run for mayor. Jack eventually agrees on condition that Gary stay there and personally supervise his campaign.

With Gary skillfully stirring things up, the race becomes the focus of a national media frenzy. And the mania only intensifies with the arrival of Gary’s longtime Republican adversary, Faith Brewster (Rose Byrne).

Along the path to election day, there are funny fish-out-of-water moments for Gary, who must learn to leave his Washington ways behind him — though his condescending presuppositions about the locals’ lack of sophistication eventually bring on a suitable comeuppance as well. Stewart also works in some innocent romance as Gary falls for Jack’s daughter, Diana (Mackenzie Davis).

CNN and Fox News take a drubbing, the former for its vacuity, the latter its jingoism. Throw a twist ending into the mix and the upshot is a romp through the world of fundraisers and spin sessions that clearly portrays — while simultaneously disdaining — the pointless maliciousness of it all.

There are lapses in taste, particularly where Gary’s rivalry with Faith is concerned. But, overall, intentions are positive and there’s an effort to be evenhanded.

“Irresistible” will change as few lives as opinions. But its warning about the grip the wealthy of both persuasions have on the process and its appeal for greater civility may prove timely as November looms.