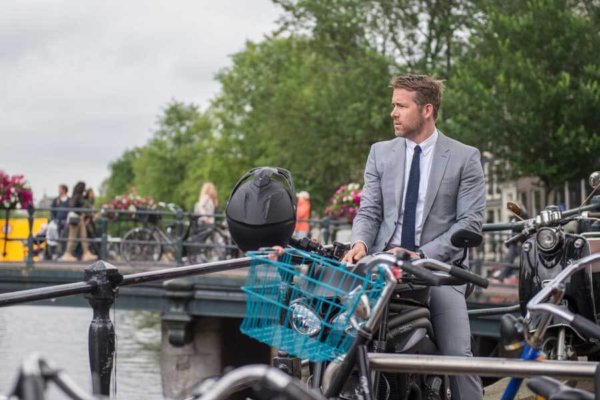 Ryan Reynolds stars in a scene from the movie "The Hitman's Bodyguard." The Catholic News Service classification is O -- morally offensive. The Motion Picture Association of America rating is R -- restricted. Under 17 requires accompanying parent or adult guardian. (CNS photo/Lionsgate)

NEW YORK — Morality is never allowed to get in the way of style as Samuel L. Jackson and Ryan Reynolds find creative ways to dispatch a host of extras in the excessively mayhem-ridden action flick “The Hitman’s Bodyguard” (Summit).

Some dialogue justifying revenge — and flirting with blasphemy — only reinforces the general disregard for life underlying the proceedings.

Jackson plays paid assassin Darius Kincaid. Unlikely as it seems, Kincaid has become the key witness in the international human rights trial of murderous Belarusian dictator Vladislav Dukhovich (scenery-chewing Gary Oldman). But, as an early ambush scene demonstrates, Interpol is not up to the task of protecting Kincaid as he makes his way from a prison in Manchester, England, to The Hague to testify.

So, while on the lam with Kincaid after the sneak attack, Interpol agent Amelia Roussel (Elodie Yung) turns to Michael Bryce (Reynolds), a once highly regarded but now down-on-his-luck security specialist — who also happens to be her ex-boyfriend — to shield her charge. What she fails to reckon on is the fact that the gunman and his proposed guardian are old and bitter enemies.

Kincaid mouths off and Bryce fumes as their mutual aversion inevitably blossoms into a bromance. Along the way, Kincaid hardly ever completes a sentence without accusing his interlocutor of having engaged in an especially egregious form of incest.

Director Patrick Hughes and screenwriter Tom O’Connor use odd-couple humor to pace the mounting body count. But they fail to disguise their real agenda as a succession of ex-Soviet republic heavies are blown up, gunned down or strangled till bug-eyed. By the time a busload of Italian nuns get thrown into the mix, viewers of faith in particular will find their patience at the breaking point.

Half-hearted attempts to justify Kincaid’s career — his victims, so we’re meant to conclude, all needed shooting — only aggravate the glaring ethical indifference by which a killing spree across Northern Europe is transformed into a demonstration of manliness for the characters and a source of fun for the audience.