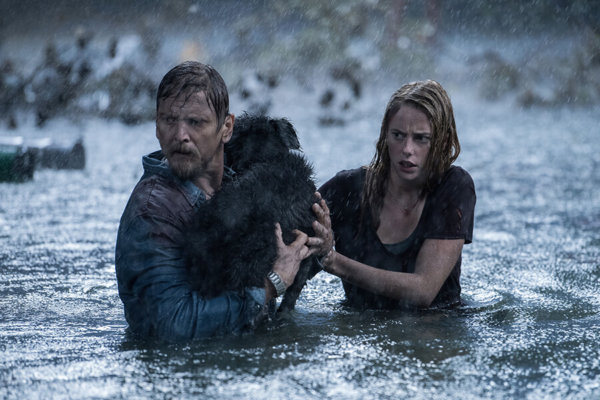 Barry Pepper and Kaya Scodelario star in a scene from the movie "Crawl." The Catholic News Service classification is L -- limited adult audience, films whose problematic content many adults would find troubling. The Motion Picture Association of America rating is R -- restricted. Under 17 requires accompanying parent or adult guardian.(CNS photo/Paramount)

NEW YORK (CNS) — What Steven Spielberg’s “Jaws” did for sharks, director Alexandre Aja’s deliberately claustrophobic chiller “Crawl” (Paramount) sets out to do for alligators. The result involves some undeniably frightening moments but also an amount of bloodletting the casual moviegoer will find excessive.

With a major hurricane bearing down on her home region of Florida, college student Haley (Kaya Scodelario) becomes concerned when her divorced and semi-estranged father, Dave (Barry Pepper), fails to return her calls. So she sets off first to the condo where he’s been living since the breakup of his marriage, then to the family home he’s been forced to put up for sale but to which he remains emotionally attached.

There she finds him unconscious with gaping wounds to his shoulder and leg. The cause of his injuries becomes apparent even before he regains consciousness as Haley has her own close encounter with the first of the many man-eaters with which she and Dad will eventually have to do battle.

To make matters worse, the basement crawl space where the gators have the duo pinned down is rapidly flooding. Fortunately, as early scenes have established, Haley is a gifted competitive swimmer (Dave was her coach in childhood). Even so, the odds remain uncomfortably long.

Those not put off by watching the main characters be gnawed on and the extras devoured will discern the glimmers of a family-solidarity theme faintly gleaming through the murky waters of this gory horror flick. Dave also encourages Haley to believe that she has the resourcefulness and will power to prevail. Still, the desperate proceedings will strike most as more torturous than entertaining.