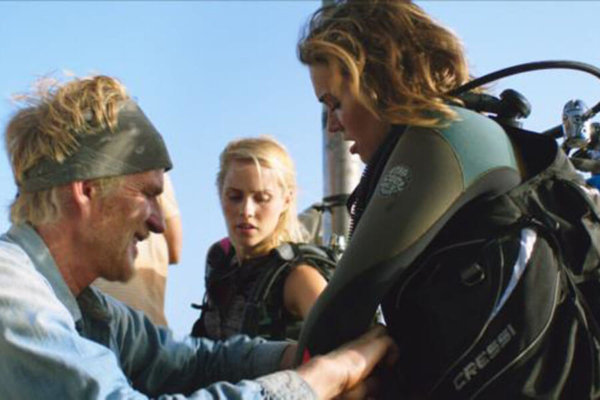 Matthew Modine, Claire Holt and Mandy Moore star in a scene from the movie "47 Meters Down." The Catholic News Service classification is A-III -- adults. The Motion Picture Association of America rating is PG-13 -- parents strongly cautioned. Some material may be inappropriate for children under 13. (CNS photo/Entertainment Studios Motion Pictures)

NEW YORK — Way back in 1975, Steven Spielberg taught the world just how scary sharks can be with his classic “Jaws.” Apparently the two main characters in the thriller “47 Meters Down” (Entertainment Studios) failed to get the message.

As a result, they face an ordeal that, thanks to its plausibility, audiences may find more frightening than many horror films featuring monsters or knife-wielding maniacs.

While viewers are not entirely spared the graphic outcome of a battle between humans and the ocean’s most efficient killers, the bloodletting is not excessive or exploitative. And the script, penned by director Johannes Roberts and Ernest Riera, goes easy on the panic-induced cursing. So, although it’s not for the fainthearted of any age, the film is probably acceptable for older teens.

While vacationing in Mexico, sisters Lisa (Mandy Moore) and Kate (Claire Holt) take up with a couple of locals, Louis (Yani Gellman) and Benjamin (Santiago Segura). The lads urge their new friends to try shark diving and, since Lisa has just been dumped by her boyfriend back home on the grounds that she is averse to adventure, she reluctantly yields to Kate’s enthusiasm for the idea.

Lisa should have gone with her gut. After only a few minutes in the iron cage designed to protect them from the fatal fish, the cable holding the enclosure snaps, and the siblings plummet to the seabed at the depth of the title.

The resourceful duo must now confront not only the predators they were meant to be observing in safety, but the consequences of a rapidly dwindling supply of oxygen as well. As they struggle to survive, and Taylor (Matthew Modine), the skipper of the boat they were lowered from, tries to organize a rescue, themes of forgiveness and self-sacrificing love are briefly showcased.

But such lofty ideals, of course, are not really the point. What Roberts is aiming for, and mostly achieves — despite occasionally clunky dialogue — is an atmosphere of claustrophobic, nerve-racking terror.

Those disposed to subject themselves to the experience will likely come away satisfied. The timid, by contrast, should stick to the shore.

The film contains some gory and gruesome images as well as a single rough and a couple of crude terms. The Catholic News Service classification is A-III — adults. The Motion Picture Association of America rating is PG-13 — parents strongly cautioned. Some material may be inappropriate for children under 13.