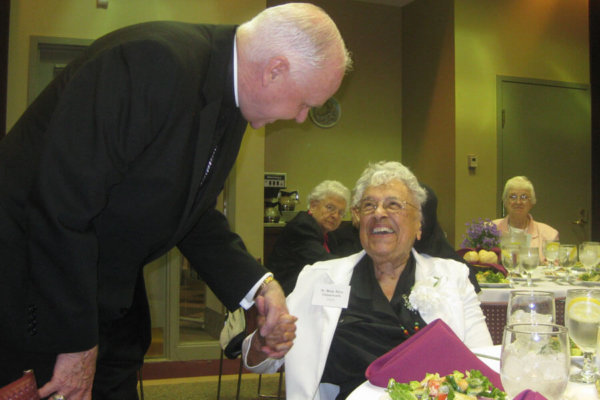 Sister Mary Alice Chineworth, a former superior general of the Baltimore-based Oblate Sisters of Providence who overcame racial discrimination in her pursuit of a religious vocation, died June 21. She was three weeks shy of her 100th birthday.

Born Innocent Victoria Chineworth in Rock Island, Ill., Sister Alice was the daughter of an African-American shoemaker and a German-American mother. She knew she was called to become a religious sister when she was a 4-year-old kindergarten student at a Catholic school staffed by the Sisters of Charity of the Blessed Virgin Mary in her home state.

“I heard the voice of the Lord as distinctly as possible,” Sister Alice told the Catholic Review in a 2011 interview. “I wanted to be like Sister Fidelis when I grow up. I told my parents, who were daily communicants, and they were thrilled about it.”

When Sister Alice tried to join the Sisters of Charity of the Blessed Virgin Mary as a young woman, she was informed that it did not accept “women of color.”

“Suddenly, my world of joy and peace and love became a frightening vacuum in which my lifelong dream was destroyed with nothing, it seemed, to take its place,” Sister Alice wrote in a 2008 column in the Catholic Review. “Yet, Christ’s light never wavered.”

After researching religious communities that would accept black women, she traveled to Baltimore via train in 1936 to join the Oblate Sisters of Providence, a religious community founded by Mother Mary Elizabeth Lange in 1829 for  women of African descent.

Throughout her many decades of ministry, Sister Alice served as a teacher at St. Pius V School in Harlem Park and St. Frances Academy in East Baltimore. She also was an educator and principal in other parts of the country and served as superior general of her religious community. Other assignments included serving as president of Mount Providence Junior College and editor of Providence Magazine. She occasionally wrote Africentric columns for the Catholic Review and wrote letters to the editor that were published.

Sister Alice held a bachelor’s degree in English from Mount Mary College in Milwaukee, a master’s degree in psychology and a doctorate in higher education from The Catholic University of America in Washington, D.C.

Ralph Moore, former director of the Community Center at St. Frances Academy, first met Sister Alice more than a decade ago as the two worked on planning the 175th anniversary celebrations for the Oblate Sisters of Providence and the founding of St. Frances Academy.

“She was often at the center of the fundraisers we organized,” Moore remembered, noting that Sister Alice helped secure significant financial support from Dr. Bill Cosby and his wife, Dr. Camille Cosby. More than $2.2 million in donations were gifted to the school in both Bill and Camille Cosby’s names, with the community center named in their honor in 2012.

In an email Moore shared with the Catholic Review, Camille Cosby called Sister Alice “a paradigm of dignity, softness, firmness, impassioned intelligence, outspokenness, humorous, spiritual; but an antithesis to the stereotype of a nun being parochial.”

As a child, Camille Cosby was educated by Sister Alice in Washington, D.C. She described her teacher as “an unbroken influence from my childhood throughout my life.”

Moore noted that Sister Alice was mentally, physically and spiritually active throughout her long life. A voracious reader, she often inquired what books others were reading.

“Up until a few years ago, she used to work out on the treadmill every day,” Moore said.

Describing Sister Alice as a “great friend,” Moore said his family traveled with Sister Alice to Maine to visit her relatives for her 90th birthday. The elderly nun showed so much energy that she wore out people decades younger, Moore said.

“She had a great mind,” he said, “and she was a straight-shooter.”

Sister Alice reported that she didn’t need recommended eye surgery after an earlier surgery left her blind in one eye. She had prayed to Mother Lange and when the day of the surgery arrived, she could see out of both eyes.

“I stand before you with perfect vision,” Sister Alice said at the celebration.

Sister Alice donated her body to science. A memorial Mass will be offered at noon July 16 at the Mount Providence Chapel in Arbutus on what would have been her 100th birthday. A reception will follow the liturgy.