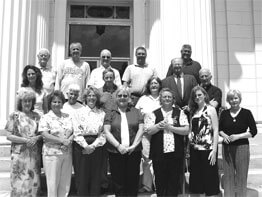 Eight parishes and four pairs of family ties are included in a regional choir that graces the western edge of the Archdiocese of Baltimore.

The Mountain Maryland Catholic Choir was formed in September 2007, under the directorship of James J. Klapka, to perform for special liturgical ceremonies in Allegany and Garrett Counties.

“The regional choir came to be by accident,” said Mr. Klapka, who is also the musical director at St. Patrick, Cumberland.

The catalyst came when Archbishop Edwin F. O’Brien was installed as the head of the archdiocese and made a visit to Western Maryland a priority.

“After my initial excitement about the archbishop’s visit, I realized we needed music,” Mr. Klapka said. “There is nothing like hearing a congregation sing together in praise of God as one unified voice.”

Mr. Klapka discussed the issue with Monsignor Thomas Bevan, the pastor of St. Patrick, and the two hit on the idea a larger, regional choir. The premise was to pull together members from several parishes and create a larger choir.

The archdiocesan choir is believed to be the only other one like the MMCC.

The MMCC rehearsed and performed for Archbishop O’Brien last October, and since performed on three other occasions.

“Some parishes are very small, and they have only a few people in their choir or have no choir at all,” Mr. Widdows said. “It’s great to see everyone together. When we sang for Archbishop O’Brien it was like we were one parish.”

The regional choir has received a high level of support from the various parishes and has been steadily growing.

“We have about 25 active members from parishes in the area,” said Mr. Klapka, who began directing choirs in 1974, in the Baltimore area. “We really appreciate the support from the various churches.”

St. Joseph parishioner Mary Jane Stakem said that the larger regional choir is able to do things that a small choir would find difficult.

“I really enjoy the multiple part harmonies that we can do,” said Ms. Stakem, of an effort that includes her brother, James. “The sound is beautiful when it comes together.”

Ranging in age from 15 to 82, the MMCC also includes a grandfather and granddaughter, Harry Brannon and Louanne Miller; a mother and daughter, Rosemary McAlpine and Gail Kenner, and a husband and wife, Paul and Mary Davalli.

Mrs. Davalli has enjoyed visiting other churches, as the MMCC rotates the location of its practices.

“Getting to visit the other parishes is wonderful,” Mrs. Davalli said. “They are so beautiful.”

Songs that the MMCC enjoy singing are “Ave Verum” by Mozart, and “Mass of Creation” by Marty Haugen. Its contemporary favorites include “In Remembrance” and “Jesus Son of God, Son of Man.”

Learning new music has been a treat for organist Charlie Mulligan.

“You can do songs with a large choir that you can’t with a small choir,” Mr. Mulligan said. “I find it spiritually uplifting to sing with this choir,” added Mulligan.