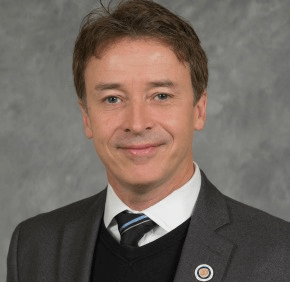 By Catholic Review Staff
Following a six-month national search, leaders of Mount St. Mary’s University announced Dec. 8 that Simon Newman, chief executive officer of Cornerstone Management Group in Los Angeles, has been named the 25th president of the Emmitsburg university.
Newman succeeds Thomas H. Powell, president since 2003.
Born in the United Kingdom, Newman, 51, holds a bachelor’s degree and a master’s degree in natural sciences from Cambridge University. He also earned an MBA from Stanford University’s Graduate School of Business, in Palo Alto, Calif.
“I am honored to help continue the Mount’s rich legacy and to further lead the university on its quest for greatness,” said Newman in a Dec. 8 news release. “President Powell has elevated the university’s academic profile as a leading Catholic liberal arts university. I am inheriting a very solid foundation for future growth and development, and very much look forward to joining the Mount community.”
Newman has nearly 30 years of experience working as an executive with a background in private equity, strategy consulting and operations. He is currently a managing director of the private equity fund JP Capital Partners, as well as president and CEO of Cornerstone Management Group, founded in 1997.
During his career Newman has started or co-founded four different businesses, completed more than $33 billion in transactions, and raised more than $3 billion in equity funding for ventures and bids he originated. He has led several business turnarounds and delivered more than $200 million in profit improvements, according to Mount St. Mary’s.
Newman started his career in consulting working with Bain & Co and LEK Consulting, where he managed the media and entertainment practice working with clients such as Warner Bros., Disney and Universal Studios. He has also worked at Canal + International, Liberty Media and the investment bank, Wasserstein & Perella.
John E. Coyne III, chairman of Mount St. Mary’s board of trustees and a 1977 graduate of the university, said the new president brings a strong background in business, finance and leadership.
“He has many strengths: his collaborative management style, vision, progressive leadership, experience as a successful entrepreneur, and passion for our mission – all remind us of the skills of our founder, Father John Dubois.”
Coyne described Newman as a “devout Catholic – involved in his parish serving as a religious education teacher, and for many years as an instructor working with youth held in detention.”
“Simon’s energy and accomplishment, and notably his firm commitment to the Mount’s strong Catholic liberal arts tradition, will serve the University well as we enter a most competitive and critical decade in higher education,” Coyne added.
The search for a new president was led by Francis W. Daily, a member of the board of trustees and a 1968 graduate of the Mount. Daily said the search committee focused on candidates with experience in fundraising, strategic planning and fiscal leadership, strong communication skills and a “deep Catholic faith.”
The announcement of the appointment was made during an on-campus Mass celebrating the Solemnity of the Immaculate Conception of the Blessed Virgin Mary.
Also see:
Mount St. Mary’s seminarian creates video to help foster vocations
Mount St. Mary’s basketball chaplain knows the game
Mount professor, Father Redmond, remembered for selflessness, friendliness
PrevNext