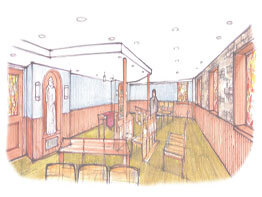 While renovating and upgrading the school’s Terrace residential building late last year, workers uncovered an area college officials believe was once the 200-year-old building’s original chapel. To honor the historic finding, Dr. Thomas Powell, president, has given approval to erect a new chapel on the spot of the original one.

The chapel will be known as the Jane T. and Eugene I. Kane Chapel of Our Lady of Lourdes.

Jeff Abel, assistant director of residence life, noted that renovation plans were amended to relocate a previously planned chapel to the discovered site. The space where the chapel had been planned will become a student conference room, he said.

Unearthing the site of the original chapel highlights the Mount’s place in history, Mr. Abel said.

“The building is important as one of the oldest residence halls in the country,” he said. “We’re going to do any small thing we can to honor that sense of history and give the students a sense of pride that they’re living in a very special building.”

The Kane Chapel will maintain existing features of the discovered space, including exposed stone walls and two pillars in the center. Modern touches will be added in the form of dark wood wainscoting, carpet and drywall, Mr. Abel said.

“It’s going to be a very useable space, and it will have all moveable furniture,” he explained, noting that the chapel’s size will be approximately 20 feet by 40 feet. “Our campus ministry can hold prayer groups and Bible studies, and it will be available for small Masses, prayer services and a place for reflection.”

Extensive renovations on the building began in May, Mr. Abel said, and are projected to be finished by August of next year.