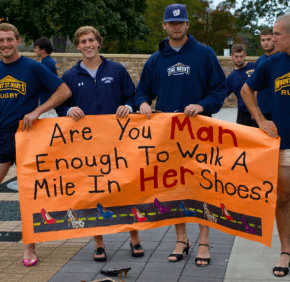 More than 50 students, staff and faculty from Mount St. Mary’s University in Emmitsburg put on high heeled shoes and walked one mile to raise money for and bring awareness about gender violence.

The Sept. 27 event raised $223 for the Heartly House in Frederick, which serves victims of domestic violence, rape and sexual assault, said Christian Kendzierski, a university spokesman. Most of the participants were male and from the school’s men’s lacrosse and rugby teams, but a few women participated.

“Having the rugby team and the lacrosse team participate really does have a major impact of not only the event but also the community,” Chianti C. Blackmon, director of the university’s center for student diversity, said in a statement. “Domestic violence and sexual assault affect college-aged students more than any other population and if we can get students comfortable talking about this issue, hopefully we can empower students to speak out.”