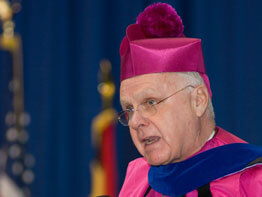 EMMITSBURG – Holding her black graduation cap in one hand and gently dabbing a tissue to her eyes to stave off an allergy attack, Lola Jemibewon was filled with mixed emotions as she stood in line waiting for her May 11 graduation procession to begin at Mount St. Mary’s University.

The 21-year-old parishioner of Our Lady of Perpetual Help in Ellicott City was elated to finish her undergraduate degree in international studies and Spanish, but sad to leave a place she described as a community like no other.

“It still hasn’t hit me,” said Ms. Jemibewon, who plans to teach English in Asia. “This is literally a place where everyone says hi to you. Even the dean knows everyone by name. There’s nowhere else like it.”

Parents and friends snapped photos, waved and shouted out the names of their loved ones as the smiling students entered the gym while the Mount St. Mary’s University Band played “Pomp and Circumstance.”

Like Ms. Jemibewon, many of the students expressed deep affection for their small, tight-knit university as it celebrates its 200th year. Their prayers were also with the family of Dustin Michael Bauer, a senior who died in March after falling on campus. The graduates wore golden pins with angel wings and the initials DMB in his honor.

In his commencement address, Archbishop Edwin F. O’Brien praised Mount St. Mary’s for remaining true to its Catholic identity and for maintaining a “joyful spirit” that is palpable.

The Mount has produced 1,900 priests, 49 of whom have gone on to become bishops, said Archbishop O’Brien. He added that the university’s founder, Father John DuBois, established the university as an example of how Catholicism and democracy could coexist.

“It called for courage and foresight for it was a moment when Catholics were suspect in America and American democracy was suspect in Rome,” Archbishop O’Brien said.

The fledgling concept of religious freedom began in Maryland when the Act of Religious Toleration was enacted in 1649, he said.

When “so many” other higher educational Catholic institutions are “embarrassed or ambiguous” about their Catholic identity, “Mount St. Mary’s University is clear and unambiguous,” Archbishop O’Brien said.

The archbishop called on graduates to take what they have learned and serve others as Christ demands.

“It’s what the hundreds of crucifixes call out to you daily as you pass them by on campus and in the hallways,” said Archbishop O’Brien, adding that it is only in giving one’s life for others that a person can find life.

“If the bicentennial graduate of Mount St. Mary’s University is driven by the engine of self-seeking and self-interest, that graduate has failed this institution and its traditions,” Archbishop O’Brien said.

The archbishop challenged students to be leaders in their communities.

“The timid move in crowds,” he said. “Leaders do not. Speak up for life, for the poor, for the outcasts in our midst.”

With the commencement exercises falling on Pentecost and Mother’s Day, the archbishop said he believed the Holy Spirit has much to do with the university’s unique character. He asked every graduate to thank the Blessed Virgin Mary for her patronage.

Dr. Powell also highlighted Mother’s Day, asking all mothers, grandmothers, great-grandmothers and step-mothers to stand and receive the thankful applause of the audience.

Jonathan M. Pressimone, senior class president and a theology major from Pennsylvania, told his fellow graduates “many of us don’t want to leave this mountainside.” The reason is love, he said.

“Do not forget this love,” he said. “We are the Mount. We always have been, and we always will be.”