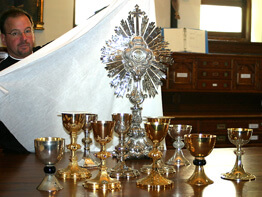 In honor of their upcoming 200th anniversary in 2008, Mount St. Mary’s University, Emmitsburg, opened their vault to remove the school’s historic chalices to use at the founder’s Mass Aug. 24 and for further Masses celebrating the anniversary.

One of the chalices was used by Father John DuBois, a French émigré priest who founded the school in 1808, selecting Emmitsburg as the place to bring his vision of a Catholic university and seminary to fruition.

Priest alumni, including Harrisburg bishop Kevin C. Rhoades, concelebrated the Mass, each using one of the historic chalices. The collection includes simple, unadorned cups to elaborate, jeweled ones donated by priests and bishops. One is the Pope Leo XII cup from 1837.

Many of the chalices have precious stones set in the base. (When a priest’s mother died, her rings were often passed on to her son to embellish his chalice.)

“The use of the chalices at the bicentennial Masses certainly help us to situate ourselves within our history,” said Father Rick Hilgartner, chaplain and director of campus ministry. “It is fitting that the liturgy helps us to do so, for the Eucharist itself has a timeless quality to it.”

The more understated vessel on the altar interestingly, said Father Hilgartner, was a small plain “saddlebag” chalice used by Father DuBois. The chalice from the 1908 centennial celebration is an elaborate Gothic style chalice with several precious stones mounted around the base.

“This dichotomy fittingly represents the growth of our institution from its humble beginnings to the university it is today,” said the chaplain.

During the Aug. 24 Mass, the concelebrants wore vestments dating back more than 100 years, as well as bicentennial robes specially made for the occasion. Other events included the presentation of the Mount’s historic timeline and the dedication of the Founder’s Plaza with an unveiling of a three-ton bronze statue of Father DuBois in the center. The evening ended with a preview of a new documentary about the university and fireworks from the top of the Grotto of Our Lady of Lourdes.

Mount St. Mary’s will continue a year-long schedule of festivities with regional celebrations until October 2008.