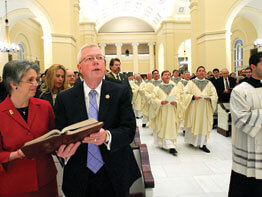 A French émigré priest, Father John DuBois, was sent by the first U.S. bishop, John Carroll, to bring liturgy and Catholic education to the “wilderness” of Maryland known today as Frederick and Emmitsburg. The priest planted a cross on “Mary’s Mountain” in 1808 to mark the site he envisioned for a future university and seminary.

Two hundred years later, Mount St. Mary’s University, Emmitsburg, and Mount St. Mary’s Seminary (second largest in the nation) still flourish, including the National Shrine Grotto of Lourdes, which draws hundreds of thousands of visitors annually from around the globe.

In an atmosphere underscoring its belief that a person is fully prepared for life only by addressing his spiritual dimension – the university prides itself on remaining faithful to its Catholic identity as it celebrates its 200th anniversary.

Thomas H. Powell, recently unanimously voted by the board of trustees to remain as president for the next five years, leads the bicentennial celebrations that include more than 41 events around the country, connecting alumni from different walks of life.
The yearlong list of activities kicked off in August and will continue until the final gala in October 2008.

“It was a three-year effort; a massive undertaking,” said Dr. Powell. One of his faculty members, Liz Monahan, in her role as bicentennial director, took a three-year leave of absence as a professor to focus on the planning and promotion. She and Richard C. Ridgway, commission chair, together steer the bicentennial commission of student representatives, committee members, steering committee, and honorary chairs.
“This is indeed an extraordinary time in our history and an opportunity for us to celebrate not only our past, but our future,” said Mr. Ridgway.

Retired Cardinal William H. Keeler, an honorary chair on the commission, was the principal celebrant and homilist at a Nov. 11 bicentennial bishops’ Mass at the Basilica of the National Shrine of the Assumption of the Blessed Virgin Mary, Baltimore. He was joined by concelebrants Cardinal Theodore McCarrick, retired archbishop of Washington, and retired Archbishop William D. Borders. Forty-six members of the clergy celebrated the Mass, including archbishops, bishops, monsignors and deacons. More than 200 priest alumni and seminarians were also present.

The Mount is known as the “cradle of bishops,” counting 48 among its alumni. It is the second oldest Catholic university in the United States and considered one of the top universities in the country for fostering a strong Catholic identity in its students.

As a small but “very proud” Catholic institution, said Dr. Powell, “we provide students with good grounding; not only in the Catholic faith, but even if you’re not Catholic, a spiritual aspect of life and a solid education.”

Starting as a small men’s college, it became “a much better one,” he said, after a critical change in its history when women were allowed admittance in 1973. Of the more than 2,000 students today, 60 percent are female and 40 percent are male.

Another significant development was the 1967 decision by the Mount’s priests (College Council) to dissolve itself and turn over leadership of the school to a lay board.

“Leadership was turned over to alumni who cared deeply about the place,” said Dr. Powell. This move had a “major effect on how I operate.”

Other significant changes before Dr. Powell’s tenure included the addition of graduate programs and extending the campus to Frederick, Hagerstown and Westminster in its continuing studies program.

Another brave step on behalf of the board of trustees switched the athletic status from Division II to Division I, a move which “made a difference to our whole university,” said the president.

While these and other accomplishments have enhanced Mount St. Mary’s, Dr. Powell said there is one uncomplicated formula for the university’s secret to success – knowing and understanding the Mount’s mission. He said the university focuses on and remains dedicated to four pillars written into the mission – faith, discovery, leadership and community.

“Faith first and foremost … we have never, ever lost sight of that,” said Dr. Powell. “Secondly, we are here to help kids to discover who they are, learning about what’s in your heart; third, preparing leaders for society … and we have ample evidence of that for 200 years; and fourth, building a community in which people are proud to be a part, listening and respecting each other. It’s as simple as that.”

Bicentennial mementos, such as a DVD documentary, school ring and a coffee table book, were produced and are sold at events and in the college store.

“Two hundred years is a big accomplishment,” said Linda Sherman, director of communications. “It’s a momentous year, which includes something for everyone.” In looking forward, Mount St. Mary’s community can expect it to branch out in academic programs to meet the needs of society and to focus on the most vulnerable people in it. It also will continue to focus on its Catholic identity, “a project that will never be finished,” said Dr. Powell.