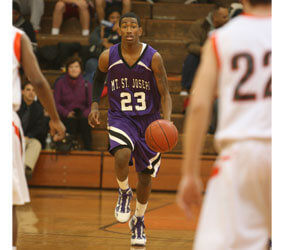 For four seasons, Eric Atkins has been a mainstay of Mount St. Joseph’s varsity basketball.

The 17-year-old senior recently signed a letter of intent to play for the University of Notre Dame. Before heading to the Big East Conference, he’s working to make his fourth and last season for the Gaels something special.

“We have great chemistry,” said Atkins, who has helped his team compile a 13-2 record through Jan. 3.“We don’t have to rely on one person to be the main scorer. We all contribute.”

“One of his greatest strengths is his versatility,” Clatchey said. “He can score, shoot, pass and play good defense. He has an even-keeled demeanor and he doesn’t get rattled. He’s always consistent.”

Atkins, who earned a 3.4 grade point average last academic quarter and who expects to match it this quarter, said his best subject “by far” is history. He plans to study business at Notre Dame, and dreams of a career in sports marketing.

“I can’t wait to get on campus next fall,” Atkins said. “You hear so much about the tradition there. I want to be there and feel it.”

Clatchey said the South Bend-bound senior will be sorely missed next season.

“It’s going to be really strange to take the court when he’s not in the lineup,” said Clatchey, noting that Atkins is one of three gifted seniors on the team. Riley Beaumont, a forward, signed with Elon University in North Carolina, and shooting guard Matt Miller signed with Seton Hill University in Pennsylvania.

“It’s going to be hard to replace them,” Clatchey said.