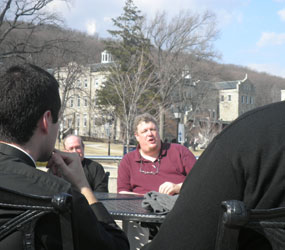 EMMITSBURG – In battle, inexperienced soldiers who prove willing and able to lead are soon at the head of their division. Today’s shortage of priests is no different – and an expert in Civil War battlefield leadership is imparting those lessons to a group of today’s seminarians.

“When I was ordained in 1976, we were taught to expect three to four assignments as assistant pastors before we were in leadership positions,” said Monsignor Steven P. Rohlfs, vice president and rector of Mount St. Mary’s University Seminary. “Now, young priests have only one assignment as an assistant and they’re in leadership – and they don’t know how to do it.”

To provide that training, Monsignor Rohlfs has created what he said is a rarity in United States seminaries: the Rectors Seminar on Parish Leadership, a course to prepare deacons, just three to five months from their ordination, to be administrative leaders.

In February he tapped an unusual instructor: George Wunderlich, a member of St. Ann Parish in Hagerstown, deacon candidate and Civil War historian, who runs a leadership institute that features battlefield medical leadership tactics in the Civil War, which began 150 years ago.

“We’ve heard it from bishops, vocations directors, exit polls and five-year out polls of priests,” Monsignor Rohlfs said. “Part of being a pastor is having practical wisdom, but you can’t force-feed wisdom. That comes from experience.”

The seminar provides new priests with leadership and administrative concepts, which will enable them to be more easily mentored by the pastor who oversees their development before they are assigned their own parish. There are 164 seminarians at the Mount, 18 at the diaconate level. The median age, Monsignor Rohlfs noted, has dropped from 31 several years ago to 25.

Students spend two days focusing on what it means to be a pastor and leader, identifying leadership styles, role-playing parish staffing situations and connecting to the lessons of the Battle of Antietam and Maj. Jonathan Letterman, then the medical director of the Army of the Potomac.

With Wunderlich’s guidance, the young men uncover their own style of carrying out their mission of serving God through the priesthood. Wunderlich, director of the National Museum of the Civil War in Frederick, said he feels called to share his knowledge of leadership in a faith-based way.

“As a Catholic I am honored to know and serve these men,” he said. “While my experience in formation is very different, we have enough in common that a bond has been created that makes teaching these men more meaningful for all of us.”

He had begun to think about a spiritual context for the training he provides to military and medical organizations through the Letterman Institute, a part of the museum.

He has been frequently requested to lead Mount St. Mary’s tours of the nearby Gettysburg Battlefield. In January, he guided Indiana seminarians, in the region for the March for Life, on a tour of Antietam Battlefield, comparing America’s evolution away from considering slaves as 3/5 of a person to the battle over pre-born humans and their status as living persons.

He was delighted, he said, to help Monsignor Rohlfs kick off the pastoral leadership program.

“I knew priests who told me that this type of training would be helpful,” Wunderlich said, “but I was not aware that the Mount was even looking for a program like this. It was truly the Holy Spirit bringing us together at the right time.”

Putting serious thought into what it means to be a leader – of a staff and a parish – was valuable to Deacon Bryan Wayne, of Harrisburg, Pa.

“You must place yourself into their shoes; it teaches you a patience with those you work with,” he said about the role-play of parish staff scenarios, such as a fictional long-term volunteer music director who insists on calling the new assistant pastor by his first name.

Looking around at the deacons who nervously volunteered to take on staff roles for practice job interviews, Wunderlich smiled and teased them gently.

“This is real life, gentlemen,” he said. “When the bishop sends you out on the first day, you may have never even heard of that parish!”