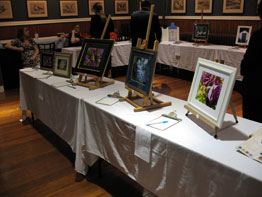 A malfunctioning traffic light in Howard County changed the lives of many in January 2006. Mount de Sales Academy, Catonsville, 2005 alumna Tara Howard, 18, died in a car accident because of it.

To honor Tara’s memory, her parents, Bill and Linda Howard, established Tara Howard’s Loving Heart and Helping Hands. The organization continues the work the dean’s list student began to help the poor and disadvantaged and those striving for social justice.

The first fundraiser, The Benefit Live Art Auction, was held April 5 in the music hall of Mount de Sales. A crowd of 200 was attracted to the live and silent auctions featuring fine art, and sports and music memorabilia; the art was donated by members of the Mount de Sales National Art Honor Society and alumnae.

As harp and piano sounded softly in the background, guests circulated around the art and consumed homemade hors d’oeuvres and desserts by The Culinary Arts Club of Mount de Sales.

Tara’s two passions were art and social justice. What was special about the selection of art up for bid was that three pieces (photos of the original artwork) were drawn by Tara. Featured on the program booklet was a charcoal on cardboard titled “Child and Father: Perspective of the Homeless.”

“She was a beautiful and bright talented artist and published poet,” said Mrs. Howard. “Her most significant gift, however, was the size of her heart and the enthusiasm with which she delivered and shared her gifts with others.”

To encourage friends to become involved in her cause, Tara founded and implemented the Social Justice Club at Mount de Sales and continued that work at Marymount University, Va., through their campus ministry program.

“Tara believed that everyone was family or friend,” said Mrs. Howard. “She made everyone feel special.”

Tara Howard’s Loving Heart and Helping Hands has already sponsored four toiletry collections distributed through Happy Helpers for the Homeless, and two dinners for the homeless on the anniversaries of the student’s car accident.

The foundation’s mission, said her mother, is to inspire other young people to volunteer and become active in the community, exemplifying Tara’s caring, energy, and spirit.