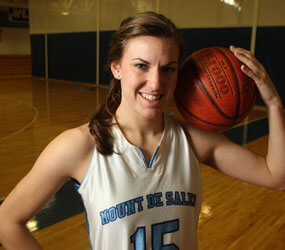 The daughter of two lifelong players, Paul and Bernadine, Schmidt took up volleyball while in the seventh grade at St. Agnes Elementary School in Catonsville.

By her freshman year at nearby Mount de Sales Academy, the outside hitter was on the school’s varsity team and public club teams with players two and three years older. She was a natural that was falling in love with the sport.

“I like how it’s fast-paced,” she said. “It’s such an adrenaline rush. Things can go your way or not go your way in a split second.”

She earned some Baltimore area Player of the Year honors this past season, a campaign where she helped the Sailors (22-2) win their third consecutive Interscholastic Athletic Association of Maryland A Conference title in November.

“It’s been a lot of fun,” Schmidt said. “It just goes to show you that volleyball has to be a team sport. Everyone has to work together. Everybody understood the pressure of winning the championship the two previous years.”

Schmidt, who is six feet tall, has received a volleyball scholarship from University of Maryland Baltimore County. When she was younger, the St. Agnes parishioner played soccer and basketball, a sport she still plays at Mount de Sales. She calls basketball her “first love.”

Schmidt’s mother is a public school teacher and has been a strong academic influence.

“She will not let me slack off with my grades,” Schmidt said. “My parents are very high on education and always wanted me to be the best I could be.”

It has paid off. Schmidt has a 4.2 weighted grade point average and is a member of the National Honor Society, the French Club, the Asian Club, Students Against Destructive Decisions and the history club.

She found many niches at Mount de Sales.

“It’s such a close family unit,” Schmidt said. “You get to know everybody and become friends with everyone.”