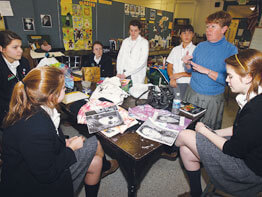 When visitors walk into Mount de Sales Academy, Catonsville, there’s a lived-in feeling that immediately strikes them. History and tradition converge with the present.

Founded in 1852, the all-girls school has walls and walls of pictures of graduating classes, punctuated by statues of prominent saints and Catholic figures.

“I knew the first time I was here for open house, I wanted to come here,” junior Anne Skomba said. “You feel a connection with the people who came before you.”

Late in 2008, the school was named one of the top 50 Catholic secondary schools in the country by The National Catholic High School Honor Roll for the fifth consecutive year.

That could be a secret to their success, but Sister Elizabeth Anne said she sees similar good work done all over the Archdiocese of Baltimore

People often identify high school students by their uniform or their code of conduct. Is there such a thing as a “Mount de Sales girl”? Although there are common threads among the 480-plus students at the school, Sister Elizabeth Anne said there is also a promotion of individualism by the Dominican Sisters who administer Mount de Sales.

“We really do see girls who are committed to making the effort to integrate their faith in every part of their life,” Sister Elizabeth Anne said. “We want them to do one thing: ‘Be yourself and be that perfectly.’ ”

Students turn what they’ve learned in the classroom outward, engaging in work projects, soup kitchens and service projects together. The school planned to send six buses of students to the Jan. 22 March for Life in Washington, D.C., as well.

Students feel emboldened by such efforts.

“I take it for granted sometimes how accepting everyone is of the faith here,” senior Maria Schuberth said.

The school will send its largest contingent of students, 70, to Mount 2009. The yearly retreat at Mount St. Mary’s Seminary and University in Emmitsburg Feb. 13-15 is for high school and college-age Catholics.

“They want obvious alternatives to the culture that is being spoon-fed to them by the media, by their groups of friends or anywhere,” said religion teacher and campus minister Rachel Harkins. “They’re just going because they’re hungry for Jesus Christ.”

Ms. Harkins, a graduate, returned as a faculty member because she felt much of her faith formation took place at the school.

“Mount de Sales is a home for many girls,” she said. “They’re so loved by the faculty and staff, especially the sisters. A lot of us came back for that reason because we left a piece of our heart here.”

Fellow alumna Kelly Cardall, the theater arts and lifetime fitness teacher, said she never planned on returning to the school professionally. There was something, however, calling her back.

“There was a connection that was very deep,” she said. “I left the state. It was like a little magnet. It was a very natural thing.”

English teacher Patricia Marlatt teaches a Holocaust class at the school. Through the class, students have met survivors and experienced other religions.

Mount de Sales faculty members acknowledge public perceptions of the school – traditionalism and demanding course loads – are true. Still, they contend there is something below the surface.

“If you have something you’re passionate about and bring it up, they’re open to see what the need and interest was to teach that,” Ms. Marlatt said. “That’s where the heart of Mount de Sales lives. We’re not so rigid that we can’t offer something like this particular class.”

Debate team moderator Chris Brown, a husband of an alumna and parent of two as well, said his students maintain their Catholic identity against public school teams – and win.

“Just stand up and speak your faith,” he tells them.

One of his standout pupils, junior Anne Skomba, said the message resonates.