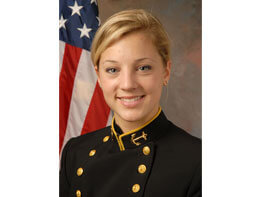 Meg Decker capped a sensational inaugural lacrosse season at the U.S. Naval Academy by being voted Rookie of the Year by LaxPower.com.

A 2007 graduate of Mount de Sales Academy in Catonsville, Decker ranked second among the Mids with 76 points, 63 goals and 58 draw controls.

“I was shocked,” said Decker, upon hearing the news of her award. “I wasn’t very good in lacrosse in high school. I was just fast.”

Also named first-team all-Patriot League, Decker was most recently one of the 83 players invited to participate in the U.S. Lacrosse Development and Elite team tryouts, which will cull the American team for the 2009 World Cup.

Decker’s arrival in Annapolis coincided with a major step for Navy, which had competed as a club team prior to the 2008 season, when it began NCAA Division I play.

The Mids’ 13-4 record set an NCAA mark for the most wins by a first-year program.

Despite Decker’s humble response to her Rookie of the Year recognition, she shouldn’t have been surprised, as she was a three-time Rookie of the Week in the Patriot League and collected a hat trick in 13 straight games.

She ranked eighth nationally in goals scored, and was the third-highest scoring freshman in the country.

Entering Mount de Sales Academy as a freshman, Decker was already drawn to the Naval Academy.

“I mentioned my interest in the Naval Academy to my mom and she just laughed,” explained Decker.

She brought it up again in her sophomore year, only to be discouraged. In her junior year, Decker completed the application process and thought it would be a “miracle” if she was accepted.

“I was drawn to the prestige of the Naval Academy,” she said. “I wanted to be a part of something big.”

Decker’s dreams and desires came to life this year, despite an intention to not even play for Navy.

With a stress-filled Plebe year behind her, Decker has decided to major in oceanography and continue on in lacrosse. The sport has become her passion and an outlet, both emotionally and physically.

“I graduated from Mount de Sales with a 3.6 GPA and never really had to study,” Decker said. “This year, the academics were tough but the emotional part was the hardest.”

It was difficult for Decker to be away from her loving parents and seven siblings. Despite their campus visits, three times a week, Decker struggled.

“I’m a very outgoing person but I couldn’t have my own opinion,” she said of Plebe year. “I couldn’t speak, and I had people my own age telling me what to do.”

Beth Decker, Meg’s mother, found it hard to watch her daughter’s journey over the last year.

“It was very hard to watch all freshmen get terribly homesick,” said Mrs. Decker, who followed her daughter faithfully, traveling to the majority of Navy’s games.

Decker often questioned her continuation in the program, saying that she knew she “could” do it, but asking did she want to?

“I’ve learned so much about myself,” Decker said. “I just have to put it in God’s hands.”