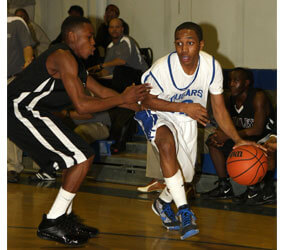 As adrenaline courses through his body before game time, Malachy Onwudiegwu wants to share his excitement with his teammates on the varsity basketball team at Mount Carmel.

“I like to motivate them,” Onwudiegwu said. “I tell them that I have their backs and they’ve got mine. I want to pump them up.”

It might seem odd for a sophomore to take on such a role, especially when there are seniors on the team and Onwudiegwu spent the 2008-09 season on the junior varsity at the Essex school.

When the current season began in November 2009, however, teammates named Onwudiegwu a co-captain, a rarity for a player his age.

He initially rejected the idea.

“I was really shocked,” he said. “I told them they should give it to a senior.”

Coach Tom Rose had no qualms with the pick.

“It’s a real compliment to him,” Rose said. “I think he’s very humble, an extremely hard worker and a good person.”

Onwudiegwu, a 5-foot-11 guard, averages about six points, five rebounds, two assists and two steals. He pays special attention on defense and is working on improving his shot selection and his ball-handling for a program that lost to Archbishop Curley in the Maryland Interscholastic Athletic Association B Conference playoffs.

“If he continues at this rate, with his work ethic, right now … it’s too early to say how high that ceiling will be for him,” Rose said.

Onwudiegwu, a parishioner of Our Lady of Mount Carmel and also a baseball player, admits that he struggled in the classroom before high school. He made a commitment to his studies in the eighth grade and now has a 3.8 grade point average, good for third in his class.

He aspires to be a member of the National Honor Society, and then a doctor, perhaps a plastic surgeon.

Mount Carmel has provided a steadying influence, he said.

“Coming to a Catholic school has kept me away from all that stuff on the street,” Onwudiegwu said. “It’s helped me stay on point. It means a lot to me to go here.”