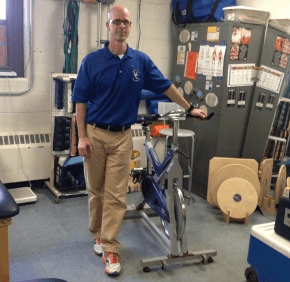 By Erik Zygmont
ezygmont@CatholicReview.org
When Josh Lamont, athletic trainer and science teacher at Our Lady of Mount Carmel School in Essex, asked his high school students why they were taking his sports medicine class, their answers highlighted a need.
“I got a lot of medical answers,” he said. “They wanted to go into nursing, or psychology or something else.”
The answer to that need? Lamont, in his fifth year at Mount Carmel, has put together a sports medicine education program that will commence in the 2016-2017 school year. It will serve, he said, not only students who want to pursue sports medicine specifically, but also those interested in the medical field generally.
Lamont presented his proposal to school administrators at the beginning of this year.
“I see (the sports medicine program) adding value to our curriculum, while also adding some focus to what some of our kids want specifically,” said Christopher Ashby, principal of Mount Carmel’s upper school.
Students enrolled in the program would take general classes – biology and chemistry, for example – as well as a core curriculum, including classes on health and nutrition, personal fitness, introductory and advanced sports medicine, strength and conditioning, anatomy and physiology, and psychology.
Psychology?
“The hardest part of rehab is the mental aspect,” Lamont explained. “(Injured) athletes start questioning, ‘Am I ever going to be better again? Am I ever going to get back out there?’ ”
While it is possible to take the classes that make up the sports medicine program without being enrolled in it, there is an exclusive component to it.
“That would be the practical hours that they spend with me,” Lamont said. “Depending on what year of school they’re in, they would spend time with me here (in his office) and in the field.”
“I can’t allow them to put their hands on an injured athlete because of liability,” he clarified, “but it’s a great learning experience because they’ll be alongside me as I treat injuries,” he said.
Students are already applying to the program.
“I’ve had no less than a dozen of our current students request to me that I write letters of recommendation for them,” Ashby said. “My expectation is the program will be filled for sure in its first year.”
He and Lamont emphasized the program’s rigor.
“Just because you think it might be cool to do sports medicine doesn’t mean you would be the right person for the program,” Lamont said, adding that students would be required to maintain a high GPA to remain in it.
Ashby called the sports medicine program “just the beginning.”
“Maybe we’ll have a nursing program in the future,” he said.