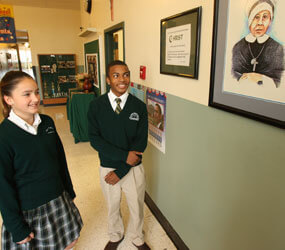 In the wake of the Jan. 12 earthquake that devastated Haiti, the international community is attempting to help that country’s residents rebuild their lives and chart a new course.

It has also led many in the Archdiocese of Baltimore to consider their own connections to Haiti.

Elizabeth Clarissa Lange, known as Mother Mary Lange, was born in Saint-Domingue, what is now Haiti, in 1784. The foundress and first superior of the Baltimore-based Oblate Sisters of Providence, she is being considered for sainthood.

She emigrated to Baltimore in the early 19th century, starting the Oblates as the first women’s religious order for African-Americans, fulfilling a lifelong goal of serving God, despite previous restrictions on women of color.

She founded St. Frances Academy in 1828 to minister to African-Americans, a mission it continues to this day. The school embraces its heritage, according to Deacon Curtis Turner, principal of St. Frances.

“Our prayers for the people of Haiti have emphasized that Haiti is Mother Lange’s country of birth,” Deacon Turner said. “Throughout the school, her Haitian heritage is well known. There is a Haitian flag in the Mother Lange Room, where teachers and students can place their written prayers.”

Recently, televangelist Pat Robertson made controversial remarks about Haiti, saying it was “cursed by one thing or another” after people there “swore a pact to the devil.”

Deacon Turner called those comments “foolish,” and said that they “sparked several conversations about the true history of the Catholic Church in Haiti and how Mother Lange’s strong faith in Catholicism, despite the way the church treated her and her sisters at times, was formed in that tiny nation.

“It is her resilience in the Catholic faith,” he added, “that inspires us at St. Frances today.”

Students there have donated money for Haitian relief to Baltimore-based Catholic Relief Services.

“We spent a week really focusing on Haiti and teachers explored different aspects of the country in class,” Sister Rita Michelle said of her staff’s response after the earthquake. “We had a school-wide collection in which the students asked parents, grandparents and anyone else to help the people of Haiti.”

Students raised $1,200 in that effort, and have worked to support the Oblates as well.

“At every opportunity, we talk about Mother Lange,” Sister Rita Michelle said. “We have pictures throughout the school. Her work continues to this day. We celebrate not only her life, but her legacy.”

Sister Alexis Fisher, superior general of the Baltimore-based Oblates, said Mother Lange will be a powerful intercessor on behalf of the suffering people of Haiti.

“When the earthquake struck, we immediately thought that it’s Mother Lange’s country,” Sister Alexis said. “It’s a real disaster, but we firmly believe that something good will come of it.”

The Oblates recently held a holy hour at their motherhouse in Arbutus to pray for the people of Haiti. They also have begun praying the “de profundis,” 30-day prayer members of the religious community traditionally pray when one of their sisters dies.

The order has also made a financial donation to a ministry run by the Little Sisters of St. Therese outside Port-au-Prince.

“Every day at Mass,” Sister Alexis said, “we also remember the souls of those who died in the earthquake and all the survivors.”