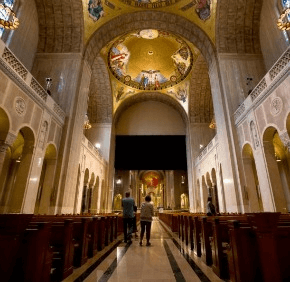 WASHINGTON – After nearly 100 years since construction began on the Basilica of the National Shrine of the Immaculate Conception, the placement of a final mosaic – inside the Trinity Dome – is expected to be completed in December 2017.
The national shrine will mark the centennial of the laying of its foundational stone in 2020.
The final mosaic will be the “crowning jewel” of what is the largest Catholic church in the United States, and will complete it from an architectural standpoint, said the senior managing director of OPUSfidelis, a Virginia-based marketing agency that is working to promote the project.
Although the mosaic will complete the architecture of the shrine, there will continue to be additions and expansions, according to OPUSfidelis.
Over 70 chapels exist within the shrine, each with a one-of-a-kind history, representing numerous ethnicities and cultures.
Martin Rambusch, of Rambusch Design Co., said that his role in the project was to help bring to life the concept of the mosaic.
“We help play the role of helping to visualize and craft and delineate and create the vision that is conceived, either visually or verbally from the client,” he told Catholic News Service during an interview this summer. “We make that happen through drawings, through models, through conversation, through sketches and then we go from there.”
He explained that the concept for how the mosaic would look went through numerous stages to be brought from a sketch to a full-scale design that will be displayed beneath the dome.
“There was a gentle verbal description given to us,” said Rambusch. “We went through making sketches to define and delineate those conceptual ideas. We then went through conversations and refinements and adjustments when submitting, so it is a communal process in participation of a variety of different groups and ourselves have then evolved to the design that is now being made in Italy.”
He explained that the design for the Trinity Dome mosaic will complement the designs already existing within the shrine.
The dome mosaic will depict the Trinity, Mary and 13 saints associated with the United States or the national shrine, the four evangelists and words from the Nicene Creed.
The artwork is being created at the Travisanutto Giovanni mosaic company in Spilimbergo, Italy, and will be shipped to the national shrine in 30,000 sections weighing a total of 24 tons and composed of more than 14 million pieces of glass.
“Prior to our work, there has been no sketch for the Trinity Dome. That sketch never existed, we are creating that from scratch,” Rambusch explained. “(For) this dome, like the other domes, we are using similar materials, a similar color palette, the same installation techniques, the same fabrication techniques, and we are doing our very best for this dome to read as a harmonious design as you enter the church.
“We are able to do that because we are involved as the designers over the previous projects as well, the Gallery Hall, the Incarnation Dome and the Redemption Dome.”
Rambusch said that the technique of putting together the final mosaic will not differ from the previously constructed mosaics, because the aim is to create a seamless aesthetic.
“(The technique) doesn’t differ at all. That’s why we’re following the same techniques to be consistent and make sure that the techniques and the visual presentation will be consistent,” he said.
He mentioned that the construction of the final mosaic is not only the completion of the shrine, but the completion of work done over multiple generations.
“It’s with great pleasure that we, Rambusch, were selected to be involved in this project,” he said. “For us, it is as well a culmination of work there at the basilica. We were involved in the first chapel in the lower church, and we continue to be in business doing what is in our mind, great work for great people. To be around to have an opportunity to be involved in this culmination project, which is (over) three generations, is very exciting for us.”