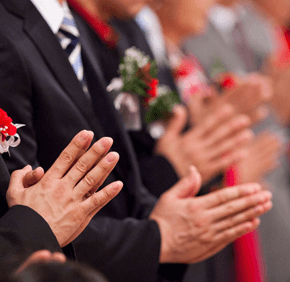 More than 700 new Catholics entered the church April 7 at Easter Vigil services throughout the Archdiocese of Baltimore.

More than 252 catechumens, those who have not been baptized, entered the church and more than 450 candidates, those who have been baptized but have not received the sacraments of Communion and/or confirmation, entered full communion with the church, said Michael Ruzicki, coordinator of Adult and Sacramental Formation and RCIA coordinator for the Archdiocese of Baltimore. The number of newly baptized Catholics is up 10 percent from last year, according to the archdiocese.

The Rite of Christian Initiation of Adults begins the process of joining the Catholic Church.

During the Rite of Election, godparents gathered with catechumens and sponsors with their candidates. Catechumens signed the Book of the Elect at their home parishes during Masses Feb. 25 and 26.

More than 400 candidates and catechumens from 52 parishes filled the Cathedral of Mary Our Queen in Homeland Feb. 26 for the annual Rite of Election.