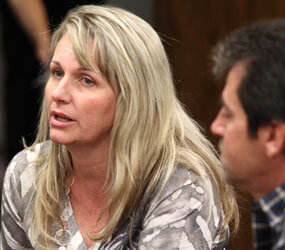 WASHINGTON – It’s been five months since Gulf of Mexico shrimper Robin Palmisano has had a catch.

Except when BP hired him and some of his crew to help skim oil from the Gulf off the coast of the Louisiana bayou, Palmisano has kept his fleet of four trawlers moored since April.

But even that small amount of work for the shrimper from Lafitte, La., will end by mid-October as much of the massive cleanup from the blowout of the Deepwater Horizon oil rig winds down.

“It’s been total devastation,” Robin Palmisano said, lamenting that he missed the peak shrimp season in May and June. He wonders if the Gulf water will be clean enough so he can take to the seas in time for the upcoming holidays.

Kim Palmisano is planning to reopen her seafood market, Captain Jonathan’s Seafood, Nov. 1 – but only if she can find a supply of toxic-free fish, shrimp, shellfish and crab.

The summer was tough for the Palmisanos. There were times when Kim and Robin struggled to put food on the table for their three sons, ages 16, 13 and 6. Kim Palmisano said for the first time in her life, she stood in line to receive food vouchers from the emergency center opened by Catholic Charities after the disaster hit in April. She was not alone. Most of the 150 other fishing families from around Lafitte were with her.

The Palmisanos were among thousands of newcomers added to the Catholic Charities rolls since 2008. Many once had jobs but ended up facing economic calamity when the depression or some other disaster struck. The agency reported a 7.5 percent jump in the number of people seeking services in 2009, the depths of the worst economic recession since the Great Depression.

The increase paralleled the 9.5 percent spike in poverty among Americans in 2009 that was reported Sept. 16 by the U.S. Census Bureau. Overall, 43.6 million people, or 14.3 percent of the population were living in poverty, the bureau reported.

“Millions of jobs have been lost and millions more people have been thrust into poverty,” Father Snyder said. “The daily lives of Americans have changed from building their dreams to a painful confrontation of the reality of continuing economic struggle.

“Our country has not seen numbers like this since President Lyndon B. Johnson launched his infamous war on poverty,” he said.

Despite the rise in poverty, Father Snyder said Catholic Charities is not altering its campaign to cut poverty in half by 2020. He called upon the country to “think and act anew” to reverse rising poverty.

He outlined three steps that agency officials believe are necessary to address the country’s poverty predicament: look at poverty as a symptom of an economic system devoid of ethics; set new standards in determining who is poor so that the reality of people lives is taken into account; innovation in developing programs to assist people take the necessary steps to escape poverty.

“The economy has been divorced from ethics so that even as we are retooling the economy, it’s critical for us to be sure as we do that we take into account what impact is this going to have on the lives of millions of Americans more who are poor now,” Father Snyder told CNS after addressing the gathering. “We can’t go back to the same old, same old that got us to where we were.

“There is a moral dimension here that our society has got to come to terms with because quite frankly many of the people whose decisions led to the recession have not accounted for ethics in their decisions,” he continued. “Until we do that we’re not going to end up with a system that truly serves all Americans.”

Father Snyder also said the way poverty standards are set must be revised to reflect the actual cost people must meet for housing, food, child care, transportation and basic education. He called for innovation and new ways of thinking among social service providers and government agencies in designing programs that aid poor families and individuals.

“They (the standards being used) don’t address the total situation of somebody today. You wouldn’t think of using a piece of carbon paper to make duplicates today. But these programs were designed at a time when that was the technology,” he said.

As particulars of the survey were being discussed, Father Snyder and several Catholic Charities officials from around the country left early to attend a private meeting with President Barack Obama at the White House.

Father Snyder said the meeting gave the agency the chance to offer its poverty-fighting ideas to the administration as the nation struggles to reverse the trend revealed by the Census Bureau statistics.