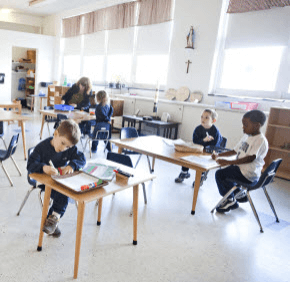 By Elizabeth Lowe
elowe@CatholicReview.org
RODGERS FORGE – At age 5, Sasha Kostic relished her independence in the classroom.
“I like how we get to choose our work,” said Sasha, referring to activities such as completing a puzzle or coloring. “All schools don’t get to do that.”
Sasha, now 6, is one of 16 first-graders in the budding Montessori program at St. Pius X School. She talked to the Catholic Review during the 2012-13 school year, when she was one of 71 students between the ages of 3 and 5 enrolled in the program.
The Montessori program, the first of its kind in the Archdiocese of Baltimore, spans ages and promotes individualized learning in a structured environment.
The program, first proposed by the Blue Ribbon Committee for Catholic Schools under Cardinal Edwin F. O’Brien, then archbishop of Baltimore, was initially for pre-kindergarten classes with 3- and 4-year-olds. By 2015-16, the program will include pre-K to 3rd grade.
As of mid-September, the program is “about full” for the 2013-14 school year, according to Maggie Dates, the school’s principal. In the spring of the 2012-13 school year, St. Pius X reported a 26-student increase in enrollment since the program’s inception in 2011-12.
St. Pius X can accept as many as 24 students into its pre-k class for 3-year-olds.
The Montessori approach was developed in the late 1800s by Maria Montessori, a Catholic physician. The program allows a child to proceed at his or her own pace and focuses on all aspects of human development – intellectual, social, emotional, physical and spiritual.
Dates likes the program because it is very student-centered.
St. Pius X works with Loyola University Maryland in Baltimore, which has a partnership with the American Montessori Institute. Mary Carol White, who teaches first grade in the Montessori program, became a certified Montessori teacher through Loyola’s program.
White said this style of learning “works well for all different types of children. My own son went through Montessori through third grade. It’s geared to every child at his or her own level. A child can repeat as much as they’d like or until they are satisfied with the activity.”
Nicole Johnson, who also teaches students ages 3-6 in the Montessori program, said the model is one-on-one and meets students where they are developmentally.
“Everything is a game, everything is fun for them,” Johnson said. “They’re getting everything they would get in a traditional program – and more.”
Step by Step
2011-12
Montessori program begins at St. Pius X with pre-K3- and 4-year-olds
2012-13
Montessori kindergarten and religious class added
2013-14
Program expanded to 1st grade
2015-16
Will include pre-K to 3rd grade
To see stories on Catholic education, click here.
PrevNext