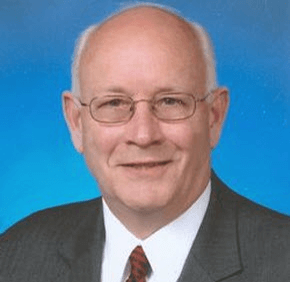 Cardinal Edwin F. O’Brien, former archbishop of Baltimore, and currently grand master of the Equestrian Order of the Holy Sepulchre of Jerusalem, has appointed Michael J. Ruck Sr. as the Lieutenant of the Middle Atlantic Lieutenancy.

Ruck, a lifelong Catholic and Baltimore native who has been a member of the Order of the Holy Sepulchre since 1997, will formally assume office and begin his four-year term during a Rite of Installation at an Oct. 26 Investiture Mass.

The president and CEO of Ruck Family Corporations, which includes three funeral homes in the Baltimore area, Ruck is a well-known figure in Catholic circles.

He and his wife of 44 years, Wendy, are longtime parishioners of the Basilica of the National Shrine of the Assumption of the Blessed Virgin Mary in Baltimore, where Ruck serves as chairman of the Basilica of the Assumption Historic Trust. Ruck, a 1964 Calvert Hall College High School graduate who has a love of history, was instrumental in the restoration of the Baltimore basilica, a project initiated by Cardinal William H. Keeler.

Ruck, who is a graduate of Bellarmine College in Louisville, Ky., and the Kentucky School of Mortuary Science, serves on several archdiocesan boards.

“On behalf of all members of our Lieutenancy, I wish to express to the new Lieutenant our warmest congratulations,” said Archbishop William E. Lori in a statement to the Knights and Ladies of the Middle Atlantic Lieutenancy. “I wish to express gratitude to those who have served us so well since the death of our esteemed Lieutenant, H.E. Ronald Precup, in particular Ad Interim Regent H.E. John Piunno, Chancellor Valencia Camp, Secretary William Tierney and Treasurer Sean Keller. We were very fortunate to have such capable members upon whom to call.”

Ruck and his wife have two grown children and three grandchildren.