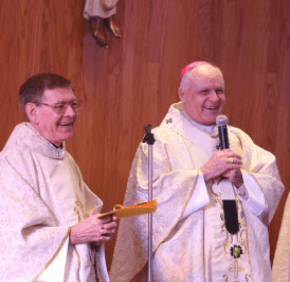 Monsignor Nalepa was a driving force behind his parish’s many outreach efforts, including a soup kitchen, programs for addicts and an “Adopt-a-Family” program that partnered with suburban parishes to provide holiday food baskets to thousands of people each year.

The soft-spoken priest was also a strong advocate for a gun-buyback program sponsored by the Catholic Review and often participated in peace vigils to combat violence in the city. Several years ago, the city honored his many contributions to bettering urban life by naming a stretch of a street in his honor.

Archbishop William E. Lori called Monsignor Nalepa’s death a “great shock and tremendous loss” for the church and the city. The priest “improved the lives of countless individuals,” Archbishop Lori said, “and did so with great humility, faithfulness and love.”

Bishop Denis J. Madden, a longtime friend who once lived in the same rectory with Monsignor Nalepa at St. Martin in West Baltimore, said Monsignor Nalepa found joy in the priesthood. He had a deep concern for his parishioners and the wider community, Bishop Madden said.

“He knew the importance of the sacraments and the critical role they played in the lives of people,” Bishop Madden said. “He was concerned not just for the parish or the Catholics, but all people. He literally chased drug dealers off the corners of the streets.”

Louise Tildon, senior pastoral advisor at St. Gregory, said Monsignor Nalepa “was everything a priest should be.”

“He loved everyone and was so understanding and compassionate,” she said. “He seemed to understand the needs of people and he reached out especially to people who were in need.”

“He felt their pain and worked very closely with them and counseled them,” Tildon said. “He saved a lot of lives.”

Monsignor Nalepa had great respect for the seniors in the community, referring to them as “elders” and reserving seating at the front of the church for them. On special occasions, the priest asked the “elders” for their permission to speak before he delivered his homily.

In a 2009 interview with the Catholic Review, Monsignor Nalepa said the programs at St. Gregory attempt to see the face of Christ in all the people they serve.

“Many people are unemployed, there are a lot of single parents, housing is an issue and drug addiction is a major problem,” he explained, “so our ministries are determined and fashioned by the needs of the community.”

Father Donald Sterling, pastor of New All Saints in Liberty Heights, said Monsignor Nalepa “was a true friend to so, so many, one who was deeply committed to church life in the city, particularly among the African-American community.”

“His presence brought a sense of peace and stability to people,” Father Sterling said.

A Pittsburgh native who was ordained a Capuchin Franciscan priest in 1970, Monsignor Nalepa served as associate pastor of St. Martin in Baltimore from 1971 to 1974 and administrator there, 1974-77.

In addition to serving at St. Gregory, Monsignor Nalepa became a vicar forane in 2003 – serving as a representative of the archbishop to area parishes. He was also the temporary administrator of St. Edward in Baltimore from 1998 to 1999 and was a chaplain for the Baltimore City Jail.

Monsignor Nalepa was involved in groups such as Baltimoreans United in Leadership Development and spoke against the death penalty and racism – sometimes participating in press conferences with city leaders such as the mayor.

Father Joseph F. Barr, pastor of Immaculate Conception in Towson, recalled that Monsignor Nalepa was arrested in Washington, D.C. years ago for protesting apartheid outside the South African embassy.

“That was before Nelson Mandela and before it was in vogue to protest,” Father Barr said. “He didn’t brag about it, he didn’t talk about it. He believed very strongly in speaking up about it.”

“He was a pastor who cared for his people and their well-being and their safety, the protection of the children from guns and violence,” Monsignor Burke said.

Father Richard T. Lawrence, pastor of St. Vincent de Paul in Baltimore, said Monsignor Nalepa “was very devoted to the people, to the parish and to the church in the city.”

“We lost another one of the real leaders of the church,” Father Lawrence said. “It’s going to take a whole lot to fill that void.”

There was no limit to the time and energy Monsignor Nalepa invested in the community, Father Lawrence said.

“He was not just interested in seeing what you needed – whether it was spiritual or material – and helping you get it,” Father Lawrence said. “He was even more interested in spotting what talents you had for ministry and convincing you (that) you had those talents and helping you to develop them. Damien put his heart and soul into that.”

A viewing for Monsignor Nalepa will take place Aug. 9 at March Funeral Home, 4300 Wabash Ave., 21215, from 4 to 8 p.m. On Aug. 10, Monsignor Nalepa’s body will lie in rest at St. Gregory the Great from 2 to 8 p.m., with a wake service, prayers and remembrances from 6 to 8 p.m. On Aug. 11, his body will be at the Basilica of the National Shrine of the Assumption of the Blessed Virgin Mary for viewing between  9 a.m. to 11 a.m.The funeral Mass will be offered by Archbishop Lori at 11 a.m.

Monsignor Nalepa is survived by his brothers, Passionist Father Richard Nalepa and Kenneth Nalepa, and his sister, Nancy Herring.

Elizabeth Lowe and Paul McMullen contributed to this story.