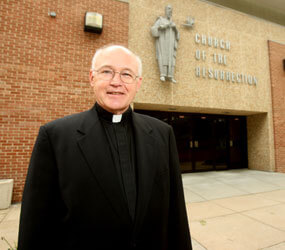 Few aspects of his priesthood have given Monsignor James O. McGovern greater joy than being with the people he serves. It’s been an honor, he said, to be present for special moments in their lives.

The longtime pastor of the Church of the Resurrection in Ellicott City is retiring at the end of June after leading a growing faith community of more than 3,500 families for 18 years.

“I liked that the people call you forth,” Monsignor McGovern said. “They see your gifts and they enable you as a priest. I’ve been called to do things I didn’t think I could do, but I found out I could do them because people encouraged me.”

As a young man, Monsignor McGovern considered becoming a priest with a religious order. It was a priest friend who convinced him to look into the diocesan priesthood.

“I did two retreats,” he remembered. “I thought, ‘If the Lord’s calling me, I’ll at least give him a chance. So I entered the seminary.”

After studying at St. Charles College, a former minor seminary in Catonsville, and Mount St. Mary’s Seminary in Emmitsburg, Monsignor McGovern was ordained by Cardinal Lawrence Shehan in 1967. The ordination was held at St. Agnes, Monsignor McGovern’s home parish and the place he had attended elementary school before graduating from what was then known as Loyola High School.

As a young priest, Monsignor McGovern was excited by the reforms of the Second Vatican Council that came soon after his ordination. His first assignments were as associate pastor of St. Rita in Dundalk from 1967-70, Immaculate Heart of Mary in Baynesville from 1970-77 and St. Luke in Edgemere from 1977-81.

Monsignor McGovern’s first pastorate was at St. Patrick in Cumberland from 1981-91.

“I liked the enablement of the different ministries that came out of the council,” the 70-year-old priest said. “I’ve enjoyed seeing that develop over the years. We have wonderful lay ministers and it’s very wonderful to share their talents in the community – building up the kingdom of God here.”

In his nearly two decades at Resurrection, Monsignor McGovern worked to encourage parishioners to be involved in the faith community. He oversaw the building of a gymnasium/multipurpose center, an addition to the school, a storage building and the renovation of an existing building.

While serving as pastor, Monsignor McGovern was also a leader in the wider south central region of the former western vicariate of the archdiocese. Cardinal William H. Keeler appointed him to serve as the first vicar forane for the region with responsibilities for 12 parishes in Howard and Carroll counties.

Asked what the biggest challenge of his priesthood has been, Monsignor McGovern said it was keeping up with administration.

In his retirement, Monsignor McGovern is looking forward to reading, hiking and visiting his family in several states. He plans to assist in parishes that need help with sacramental ministry.

Monsignor McGovern said he will miss being with the people of his parish every day, but he won’t be a stranger to Resurrection. He plans to return for weddings and funerals.