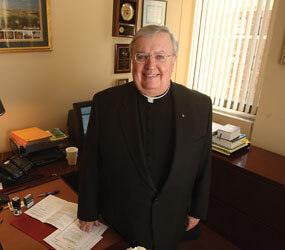 Monsignor Jeremiah F. Kenney can’t even begin to guess how many thousands of annulment cases he has presided over as judicial vicar of the Interdiocesan Tribunal of Appeals for the Province of Baltimore.

In every one, the 69-year-old priest has worked hard to provide a sympathetic ear.

“I have to remind myself all the time that behind the files are people – hurting people who really want to start all over again,” said Monsignor Kenney, who also serves as the archbishop’s delegate for canonical affairs.

“More than anything, I’ve learned that the daughters of love are kindness and compassion,” he said. “I hope I would be remembered as someone who was kind and compassionate.”

After 34 years as judicial vicar, Monsignor Kenney is retiring on March 18 – the 37th anniversary of his ordination to the priesthood.

Looking back on his many years working in an often-misunderstood ministry, the Connecticut native said he hopes he has made a difference in people’s lives and that he has been a healing presence for people going through the annulment process.

Monsignor Kenney first began to work part-time in the tribunal in 1974 at a time when there was a six-year backlog of cases. By 1976, he was working full-time.

“Our first task was to get the entire backlog broken with the idea that justice delayed is justice denied,” Monsignor Kenney said.

While the bulk of his priesthood has been devoted to working in the tribunal, Monsignor Kenney said he has enjoyed all the aspects of his ministry. After his ordination, he first served as associate pastor of Immaculate Conception in Towson, where he taught at Towson Catholic High School. He is the former rector of the Basilica of the National Shrine of the Assumption of the Blessed Virgin Mary in Baltimore. He has served as chaplain to a wide range of organizations including the U.S. Secret Service, the U.S. Drug Enforcement Agency, the inspector general’s office of the Social Security Administration, the Maryland state police, the Catholic Medical Association – Baltimore Guild and the Maryland Knights of Columbus.

Monsignor Kenney also serves on the board of directors for the Cathedral Foundation, parent company of The Catholic Review.

Monsignor Kenney was made a papal knight in the Pontifical Ecclesiastical Equestrian Order of the Holy Sepulchre of Jerusalem in 1997 and was elevated to Knight Commander in 2000.

A former Holy Cross brother, Monsignor Kenney said he “couldn’t be happier” that he discerned a call to the priesthood and that Cardinal Lawrence Shehan allowed him to become a priest for the Baltimore archdiocese.

“It was a marvelous choice, and I’d do it all over again,” he said.

As for his retirement, the author of two books said he plans to write another book, give retreats and assist at Immaculate Conception in Towson. He will continue serving as the archbishop’s delegate on the canonization of Father Patrick Peyton.