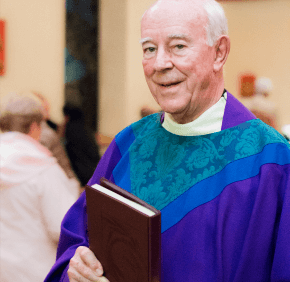 By George P. Matysek Jr.
gmatysek@CatholicReview.org
Twitter: @ReviewMatysek
COCKEYSVILLE – When Monsignor Paul Cook was heading the archdiocesan religious education office in the early 1970s, Cardinal Lawrence Shehan confided that he would not have appointed him if the priest’s knowledge of religious education wasn’t greater than the cardinal’s.
Monsignor Cook was given virtual free reign in running what was then known as the Confraternity of Christian Doctrine. At the same time, Monsignor Cook recalled, the cardinal held him accountable for his decisions.
“That’s been my same style as pastor,” said Monsignor Cook, pastor of St. Joseph in Cockeysville for 37 years. “All these people (leading parish ministries) know more about what they’re doing than I do, so they have a freehand to do it. But they’re also accountable.”
It’s a collegial approach to ministry that places trust in parish leaders.
As Monsignor Cook, 82, prepares to retire, his colleagues said his stewardship and cultivation of leadership have left their parish in a strong position.
St. Joseph will celebrate a farewell Mass Jan. 25 at noon, followed by a parish open house.
“His first priority was always the staff,” said Marie Lybolt, St. Joseph’s director of religious education. “He was always ready to listen to an idea and go with it.”
Among the many programs he supported was a pioneering “host ministry” in the early 1990s that relied on small community faith-sharing. He managed a huge campus serving 3,500 registered families, shepherding the completion of new school structures and a parish center.
In Monsignor Cook’s time as pastor, four archbishops of Baltimore relied on him as a mentor to future priests. The pastor estimates that more than 50 seminarians have been assigned to his parish over the last four decades.
In addition, numerous priests have been stationed at St. Joseph as associate pastors following ordination. Father Gerard Francik, pastor of St. Mark in Fallston, was one of them, serving as associate pastor of St. Joseph from 1987 to 1992.
“They say priests tend to model what they learn from their first pastor,” Father Francik said. “I find myself doing things he did. He was a real model of collaboration and collegiality. He knew the people well and they loved him. He knew everyone and what was going on in their lives.”
Father Francik said Monsignor Cook cultivated vocations through his priestly example.
Monsignor Cook’s own call to the priesthood was inspired by the example of his parish priests.
Baptized at St. Martin in Baltimore and raised in St. Bernardine in Baltimore, where he attended the parish school, Monsignor Cook said his parents and the Sisters, Servants of the Immaculate Heart of Mary supported his pursuit of the priesthood.
“We must have had a dozen men who went into the seminary who were ordained to the priesthood and twice that many girls who entered religious communities,” said Monsignor Cook, whose younger sister, Mary Ann, is a Sister of Notre Dame de Namur. “Everything was very affirming.”
At 13, Monsignor Cook entered St. Charles College, a former minor seminary in Catonsville. He continued seminary studies at The Catholic University of America in Washington, D.C., and was ordained to the priesthood in 1959 at the Basilica of the National Shrine of the Assumption of the Blessed Virgin Mary, Baltimore.
Monsignor Cook’s early assignments included a 12-year stint as associate pastor of the Cathedral of Mary Our Queen, Homeland; director of the Confraternity of Christian Doctrine; and chaplain to Daughters of Charity ministering to unwed mothers in the Baltimore area. He assisted in the reorganization of Catholic Center departments in 1974, becoming secretary of the department of education that oversaw Catholic schools, religious education, campus ministry and other outreach.
On May 7, 1977, the feast of St. Joseph the Worker, Monsignor Cook arrived at St. Joseph.
The easygoing pastor said he loves every aspect of the priesthood – especially ministering to people. He encouraged those considering religious life to “get into it.”
“It’s like learning to swim,” he said. “You have to get into the pool. If it’s not for them, they’ll find out.”
In his retirement, Monsignor Cook will live at Mercy Ridge Retirement Community in Timonium. Eventually, he said, he would like to help a local parish as a weekend assistant. In the immediate future, however, he will take the first sabbatical of his 55 years as a priest.
“I want to read, pray and reflect,” he said. “I’m going to get myself reoriented and then decide what to do next.”
Also see:
Fund to benefit retired religious gives back to those who have given
To do it over again, 100-year-old sister wouldn’t change a thing, except her name
PrevNext