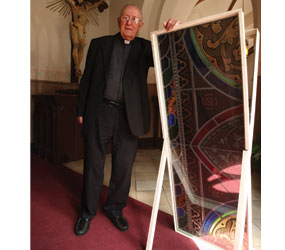 Sixty years have passed, but images of Monsignor Arthur W. Bastress’ ordination flood back to him.

“I can remember getting up that morning and feeling like I was in a dream,” said the 84-year-old pastor of the Shrine of St. Alphonsus in Baltimore. “It didn’t seem real.”

Never did Monsignor Bastress imagine that when Archbishop Francis Patrick Keough laid his hands upon him in 1951 that he would still be serving, as the oldest pastor in the Archdiocese of Baltimore.

“I remember placing my hand in the bishop’s hands and promising obedience to him and his successors,” Monsignor Bastress said. “I took that very seriously.”

He had good reasons for such beliefs.

“I was always taught by my mother and father that when you make a promise, you’re only as good as your word,” he said.

“I look for one-liners,” he said. “Love me as I have loved you. Find a one-liner you can say over and over again.”

From the beginning, Monsignor Bastress knew his priesthood was a gift. Following his ordination, he made his way to his elated parents at the Basilica of the National Shrine of the Assumption of the Blessed Virgin Mary.

“I remember my dad crying and my mother crying,” he said.

In the early days of his priesthood, Monsignor Bastress served as associate pastor of St. Dominic in Hamilton and St. Patrick in Cumberland. He moved on to Holy Trinity Parish in Glen Burnie, and also served as temporary administrator of St. Andrew by the Bay, Annapolis, and St. Mary’s, Pylesville.

He was appointed pastor of Immaculate Heart of Mary in Baynesville in 1970.
Along the way, the Second Vatican Council began to institute monumental changes.

Monsignor Bastress said disagreements are natural along the way, but in the end, he knows what matters.

“We need one another in that body we call priesthood,” Monsignor Bastress said. “We’re brothers.”

He enjoyed heading up the archdiocesan office for the diaconate for 10 years, aqnd moved in He moved in 1990 to the since-closed St. Jerome Parish in Pigtown. He also helped take care of St. Martin and St. Peter the Apostle parishes. The three would combine to become Transfiguration Catholic Community.

When Auxiliary Bishop John H. Ricard was named the head of the Diocese of Pensacola-Tallahassee, Monsignor Bastress was asked to serve as interim delegate of the Urban Vicariate in 1997. During that time, he helped organize a popular evangelization event along Baltimore’s Inner Harbor area.

“That was really neat,” Monsignor Bastress said, “and a real accomplishment.”

Monsignor Bastress was energized by his appointment as pastor of St. Alphonsus in 1998. He serves three different communities, including Lithuanians, Ordinary Rite Mass-goers and those who come for the Tridentine Latin Rite Mass.

Celebrating the Latin Mass brings Monsignor Bastress back to his youth and the first decade of his priesthood.

“It’s like riding a bicycle,” he said. “You lose some of your balance, but it’s alright. I would say after two months, I was comfortable again.”

Both St. John Neumann and Blessed Francis X. Seelos were pastors of St. Alphonsus, and its legacy is something he takes seriously. He wants to spend the rest of his life at St. Alphonsus and help others discover its rich history.

City ministry is something that has brought him great joy.

“I was born and raised in the city. I’ve always loved Baltimore,” Monsignor Bastress said. “I loved the old way when all the stores were downtown. I love the way it is today.”

Having said that, Monsignor Bastress believes Baltimore can be better.

“The only thing that’s going to save us is the word of God,” he said. “We still have not found a way to get that out on the streets. I don’t have the answers. Maybe that’s what keeps me going. Somebody’s going to find a way. There’s going to be a big transition in the city of Baltimore through faith. And guess which church and faith will still be in the city? The Roman Catholic Church.”