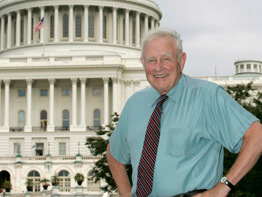 WASHINGTON – After decades of being the behind-the-scenes – and consistently off-the-record – point man for the U.S. Conference of Catholic Bishops in lobbying on Capitol Hill, Frank Monahan seemed simultaneously tantalized by and wary at the prospect of talking openly with a reporter about the work he did for 36 years.

Just before Monahan, 69, retired as director of the Office of Government Liaison at the USCCB at the end of June, he agreed to talk with Catholic News Service.

He also touched on what might lie ahead as the bishops’ conference goes through a reorganization that will affect how the church’s public policy arm functions in Washington. He was one of more than 30 longtime USCCB employees who took a voluntary retirement buyout as part of that reorganization.
For a well-connected player in a city that at times seems driven by who’s telling reporters what, Monahan has been atypically wary of having his name appear in a newspaper.

While he almost always has been happy to explain to reporters off the record what’s happening with an issue, Monahan has been quoted in fewer than a dozen CNS articles in the last 20 years. And some of those citations were from letters or advisories he sent to politicians or the church’s network of public policy advocates.

But what Monahan knows about what went into passing legislation ranging from the Carter-era creation of the U.S. Education Department to this year’s law raising the minimum wage could fill more than a few newspapers.

He has worked on tax credits for families with children in parochial schools; postage rates for nonprofit organizations; child care programs; housing for the poor; food stamps; the Civil Rights Restoration Act of 1987; religious freedom legislation; and provisions that affected the poor in decades worth of federal budgets.

In a tribute placed in the Congressional Record June 26, Kennedy noted that he had worked with Monahan under seven different presidential administrations. Monahan, he said, has taken up “many of the great social justice issues of our day, always taking the side of the vulnerable, the voiceless and the victims, always standing firm in his belief that here on earth God’s work must be our own.”

That’s part of what kept Monahan enthused about his work.

“Our biggest clout is our moral clout, which politicians can relate to,” he said. The Catholic Church’s rich history of standing up for the poor and downtrodden is well understood by the senators and members of Congress whose support Monahan has cultivated for various issues.

“I think that probably half of the people in Congress would probably be preachers if they weren’t politicians,” he said, explaining his belief that most people get involved in politics because they sincerely want to make the world a better place through the political process.

In that environment, the Catholic Church fills a spot occupied by few others.

Unlike many of Washington’s other lobbying interests, the church doesn’t come to the table with anything financial to offer politicians, he noted. But the church’s teachings, not to mention the millions of voters who might be reached by an issue education campaign from Catholic pulpits, can be powerful elements of persuasion, Monahan said.

As the USCCB downsizes and retools its approach to public policy, Monahan said he worries that the bipartisan relationships he, his staff and their predecessors have built up may suffer. The current polarized political environment makes such relationships hard enough, he said.

“They want to prioritize around here,” he said, “but they’re going to have to deal with some of the realities and prioritize on the basis of what is realistically going to happen on the Hill.”

In his years in Washington, it’s been clear that “coalition politics and relationships with other groups are essential” to accomplishing anything, he said.

A Chicago native and graduate of Loyola University there, Monahan came to the bishops’ conference to work for the education office in 1971. Previously he’d been director of social programs for the Chicago Archdiocese’s school board and for the board’s neighborhood youth corps program. In 1973 he joined the government liaison staff, becoming its director in 1985.

Even as he headed into retirement, Monahan was cautious about spilling too much inside information. He hinted at various major bills with his fingerprints on them – written behind the scenes, of course – at least in part to address the concerns of the USCCB.

He told the story of one important bill that had been carefully negotiated over the course of several years, only to be nearly derailed at the last minute by a well-connected and well-meaning bishop who misunderstood some key points.

In that case, the bishop had been convinced that a provision of the bill would have somehow made abortions more readily available. Monahan and others within the church were confident that wasn’t the case. But the bishop couldn’t be convinced and he plowed ahead, taking advantage of connections he had to call the White House himself and rallying opposition where previously there had been none.

In the end, after concerted fence-mending and a little backstage maneuvering by Monahan and his staff, the bill went through as negotiated, without the abortion-enabling effect the bishop feared, he said.

“You can tell that story,” he said, adding with a smile, “Just don’t use any names.”