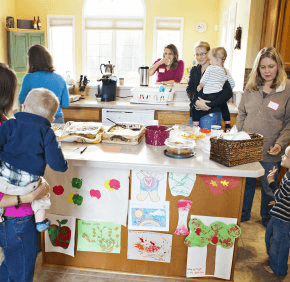 By Elizabeth Lowe
elowe@CatholicReview.org
Twitter: @ReviewLowe
PARKVILLE – Leading six women in a heartfelt dialogue about their faith Oct. 23, Melanie Hecht excused herself several times.
Her 2-year-old son required her attention – and the women didn’t skip a beat in their discussion.
Hecht, a 39-year-old mother of three and parishioner of St. John the Evangelist in Hydes, founded the parish’s mom’s group in September 2012. With children welcome, Hecht’s son wasn’t the only little one who called out – or shrieked – “mommy.”
“It’s chaotic, it’s fun,” Hecht said. “There is a really strong need for mothers of young children to surround themselves with other like-minded women who want to raise their family Catholic in this very secular world.”
Watch a video.
A core group of eight moms – and their combined nine children under age 4 – meet for a couple of hours twice a month at Hecht’s home. The women typically spend a half-hour socializing before diving into the day’s prayer, video and discussion. They use the book “Full of Grace” by Johnette Benkovic as their guide.
The moms take turns keeping an eye on the children playing in another room so the other women can actively participate in the meetings.
“It’s a neat group of women who are wise in so many different areas,” said Hecht, chairwoman of St. John’s evangelization committee and a pastoral council member.
“It’s hard to find other stay-at-home moms that are going deeper in faith,” said Danielle Mitchell, a 37-year-old mother of three who worships at Church of the Nativity in Timonium.
Melanie Rodriguez credits her attendance at the meetings in the past year with helping her gain a better understanding of her faith. As a result, Sunday Masses are more meaningful.
“I need to strengthen my faith to be an example to them,” said Rodriguez, referring to her three children, ages 2, 4 and 6.
The 36-year-old also enjoys the relationships she’s formed with the women.
“It’s always good to talk to adults during the day,” said Rodriguez, a parishioner of St. John, Hydes.
Carrie Taylor, a mother of two who is preparing to enter the Catholic Church on Easter Sunday, April 20, relishes the meetings.
“I don’t know how I could survive without it,” said Taylor, 33, whose family worships at St. John, Hydes. “The discussions are great because we have so many opinions.”
“We inspire each other,” Hecht said, “even if it’s just to get your laundry done, how to do life with kids and a husband in this crazy culture we live in. How do we do it in a way that is holy? It’s awe-inspiring, the wisdom that comes from each of us.”
Also see:
St. Ignatius Loyola Academy celebrates 20 years of transforming lives
Angel of Consolation Memorial Garden in Harford County offers hope to those who have endured loss
PrevNext