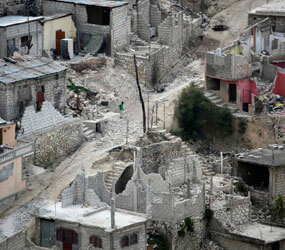 WASHINGTON – It took a major earthquake, but momentum is building to cancel all of the remaining debt that Haiti has taken on from several international financial institutions.

The years-long effort by organizations such as the Jubilee USA Network and the U.S. Conference of Catholic Bishops to convince the institutions to relieve Haiti of its debt got a boost Feb. 5 when Treasury Secretary Timothy Geithner announced that the U.S. would work with its worldwide partners to see that the impoverished Caribbean nation’s indebtedness was forgiven.

Geithner’s announcement followed an earlier statement from Dominique Strauss-Kahn, managing director of the International Monetary Fund, who said Jan. 20 that the IMF would discuss with donors ways to “delete all the Haitian debt.”

The actions are significant because Haiti must focus all of its financial resources toward recovery and rebuilding large segments of the country that were destroyed during the Jan. 12 earthquake, said Melinda St. Louis, associate director of the Jubilee USA Network, a coalition of more than 75 religious denominations and faith communities, human rights, environmental and labor organizations focusing on the biblical concept of debt forgiveness.

Geithner’s announcement “is a very positive step,” St. Louis told Catholic News Service. “Having their support is critical. We do have that high-level political commitment and we do consider that a victory.”

Haiti, especially after the earthquake, is the perfect case for debt forgiveness, said Bishop Howard J. Hubbard of Albany, N.Y., chairman of the U.S. bishops’ Committee on International Justice and Peace.

In a Jan. 26 letter to Obama administration officials, Bishop Hubbard said debt relief is just one part of a “long-term coherent strategy for recovery, development and poverty reduction in Haiti.”

“Our committee has long advocated for debt relief for these Third World countries,” Bishop Hubbard told CNS Feb. 15. “We are convinced without debt relief they’re not going to be able to break that cycle of poverty in which they are involved.”

In his letter, Bishop Hubbard called for additional grants, not loans, for Haiti’s recovery and stressed that U.S. leaders should “encourage other governments as well as multilateral institutions to do the same.”

St. Louis said a network of advocacy groups that spanned the globe moved into high gear immediately after the earthquake to renew the push for the debt cancellation. Letters and petitions from around the world were sent to the finance ministers of the Group of Seven nations prior to their meeting in Iqaluit, Nunavut, early in February.

Congressional leaders, led by Reps. Maxine Waters, D-Calif., and Ileana Ros-Lehtinen, R-Fla., also have lent their voices to the effort.

Waters has repeatedly introduced legislation with co-sponsors from both sides of the aisle on the issue, not only for Haiti, but other poor countries as well.

Her latest effort included the reintroduction in December of what is known as the Jubilee Act, H.R. 4405, which was referred to the House Financial Services Committee. An earlier version of the act passed overwhelmingly in the House of Representatives in 2008, but the Senate did not complete action before the last session of Congress ended.

Haiti has a long history of owing money to other countries. To gain its independence from France in 1804, Haiti was forced to compensate the French for loss of “property,” including slaves. With France threatening to invade the country in 1825, Haitian officials agreed to pay 150 million francs, financed by a loan from a French bank. The debt was not paid in full until 1947.

Between 1957 and 1986 the country was controlled by the father-son dictatorship of Francois “Papa Doc” Duvalier and Jean-Claude “Baby Doc” Duvalier. The pair siphoned off hundreds of millions of dollars in loans and other assistance for their personal benefit, leaving the country to foot the bill. Instability in the Haitian government, leading to five different governing coalitions during the last 10 years, further eroded the country’s ability to develop.

St. Louis said the pressure Haiti faced throughout its history to pay off its international debt has limited its ability to fund infrastructure projects, health care, education and other basic needs. The result has been that up to 80 percent of Haitians live in abject poverty, and unemployment hovers between 60 percent and 70 percent.

The latest statements by Geithner and Strauss-Kahn give advocates such as St. Louis hope that Haiti’s future will begin to change as long as the world helps rebuild the country following the most recent natural disaster.

“We don’t want to continue this cycle of indebtedness and want to look at how, moving forward, borrowing countries can enter into responsible relationships so there are not the odious debts,” she said.