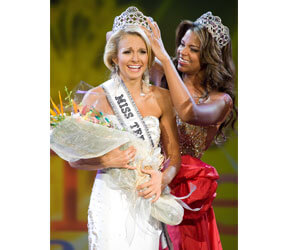 BROWNSVILLE, Texas – When Danielle Doty, Miss Texas Teen USA, arrived in the Bahamas to compete in the Miss Teen USA pageant, she surrendered to God’s plan for her life, the Harlingen native said.

“I let go and let God,” Doty told The Valley Catholic, newspaper of the Brownsville Diocese, in a telephone interview from New York City. “I was there, I had prepared, I had worked out, gotten in shape and from that point on, it was really in God’s hands. I knew he would do what was best.”

Doty, a parishioner at St. Anthony Church in Harlingen, was crowned Miss Teen USA 2011 July 16 at the Atlantis Resort in the Bahamas.

“As soon as they called my name, I think you just go on pause,” Doty said a couple of weeks after her win. “You don’t hear anything, you’re not thinking of anything. You’re just taking in the moment.”

After winning the Miss Teen USA title, Doty went from being a Harlingen resident to living in New York City. Almost as soon as she was crowned, she was whisked away for interviews and appearances. During her reign as Miss Teen USA, she will attend the New York Film Academy and study broadcast journalism.

“It’s absolutely fantastic,” she said. “I am loving New York right now and having a blast. I still can’t believe it.”

Doty graduated from Harlingen High School South in May, finishing in the top 10 of her class. She is the daughter of Kevin and Liz Doty and has an older brother, Dylan, 22.

Doty was baptized, received her first Communion and was confirmed at St. Anthony Church. Her faith has given her the courage to face many challenges throughout her life, said her mother.

“We brought up both of our children with the belief that with God in your life, you will make the right choices and you will always have someone with you,” Liz Doty said.

Danielle Doty said that she feels a responsibility to make the most of this blessing that the Lord has bestowed upon her. She feels called to help others, especially girls.

“His putting this in front of me is giving me an open door to take full action,” Doty said. “It’s not for me by any means.”

“I’ve always said she is as pretty inside and she is outside,” said Father Tom Pincelli, who was pastor at St. Anthony Church for 14 years and remains a family friend of the Dotys. “Beauty pageants can be beauty pageants, but Danielle deserved to win on so many different levels simply because of the fact that she has her act together.”

Doty also plans to expand the charitable organization that she started called Modest is Hottest, which teaches girls about self-respect and self-esteem.

“I want girls to know that people will like you and you will have friends when you are comfortable in your own skin,” she said.