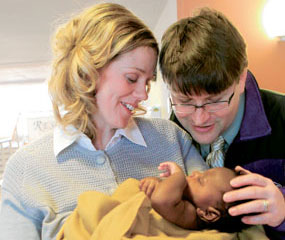 Like all miracle stories, this one is filled with prayers.

On Oct. 14, Father Michael Triplett walked into Bethlehem’s Milk Grotto, where it is said that the Blessed Virgin Mary nursed the infant Jesus. Several miracles have been attributed to the site, including for women wanting children. There, in that humble cave, Father Triplett prayed that the Kleintanks would become parents.

The couple had spent the previous two years pursuing adoption, after four years of being unable to conceive.

“At times, their hearts were broken,” said Father Triplett, a family friend and associate pastor of Church of the Resurrection in Ellicott City, where Kate is the religious education director.

Her phone rang Nov. 1, a little more than two weeks after Father Triplett’s prayer. It was a counselor from Adoptions Together, a Silver Spring agency, informing her that it had a two-week-old baby for the Kleintanks, the result of an adoption plan.

Two days later, the Kleintanks drove 30 miles to Silver Spring to meet their son. Nathan, a natural worrier, was antsy.

After some paperwork and anxious waiting, the agency brought Joshua into the room to be with his new parents. Kate looked at the little black child and felt instantaneous love.

Nathan, 39, and Kate (nee Adelsberger), 34, are each the oldest child in large, Catholic families of European origin.

He grew up in Cincinnati, while she was raised in St. Agnes Parish and its elementary school. She went on to graduate from Seton Keough High School and the College of Notre Dame of Maryland.

They met on a blind date in 2001. Weeks later, Kate discovered Nathan was “a keeper” when he met her sister, Noelle, who has several special needs. Nathan never shied away, instead embracing her.

Nathan also volunteered when Kate was the youth minister at St. Mark in Catonsville. On the third anniversary of their blind date, Nathan and Kate visited the chapel at St. Mark.

Nathan was wearing a suit and shaking. He asked Kate if they could pray together before a statue of the Blessed Virgin Mary. Inside his coat pocket was an engagement ring that he nervously patted. Kate was elated; the couple married a year later and attempted to add to their family.

“We both love children,” Kate said. “It wasn’t a question of if we were going to have kids, it was how many. I wanted to be a mother.”

After years of unsuccessful attempts to conceive, they were told by medical professionals that it would never happen. Their hearts sunk.

“It was a struggle,” Nathan said. “There were some ‘turn it over to God’ type times.”

Road to a miracle

The Kleintanks pursued adoption. If it was a boy, the child would be named Joshua, a name that derives from Yeshua, a common transcription for Jesus.

The couple spent hours filling out paperwork and opened their home to scrutiny. The adoption process cost them thousands of dollars.

The Kleintanks created a book intended for Joshua’s birth mother, which introduced the couple through notes and photos. It included a lengthy note of deep appreciation.

The Kleintanks were accepted into the Adoptions Together program in September of this year, after months of work. They were told to wait for a call. Many times Kate’s cell phone would ring and she wouldn’t recognize the number. It was never the adoption agency.

The Kleintanks embraced adopting a child from another race. Both come from diverse families, which include various ethnicities and blacks. The couple met with families who adopted children of other races.

“They were so honest and open,” Kate said. “They said ‘Once you have that child in your arms, color doesn’t matter.’”

Nathan said he will stand side-by-side with Joshua through all adversity.

“We understand there might be some prejudice out there,” he said, “but you just have to educate them, talk with them and deal with them.”

The strength to move forward

One day after Kate brought Joshua home from the adoption agency, she received a call from her doctor. Kate has a history of precancerous cells and the doctor said they had been discovered for the fifth time. If it was not addressed, she would almost certainly develop uterine cancer.

The doctor recommended a hysterectomy.

“I would not have been able to handle hearing that message without having Joshua in my arms,” Kate said. “I really believe it was God’s way of allowing me to deal with that.”

Kate will have the surgery in May. She has come to terms with the fact that she will never have a biological child.

“Through everything, I’ve become closer to God,” Kate said. “People would say, ‘Are you angry?’ and I would say ‘No, it’s my source and my strength.’ I pray every day for birth mothers to choose adoption as opposed to abortion, that they have the courage to choose life.”

A child for all

On the night Joshua arrived home, family members and friends who prayed for years that the Kleintanks would have a child came by. They all wanted to shower the Kleintanks with love.

“It was so overwhelming,” Nathan said.

“You looked at Kate and Nate and it was so clear they had become a family,” Richardson said. “Joshua was already responding when Kate would talk to him. He knew it was safe. This was someone who was going to care for him.”

Joshua played the Christ child at Church of the Resurrection’s Christmas pageant. He will be baptized there Jan. 1. Father Triplett and Richardson will serve as godparents.

“They wanted to share their faith and love with a child.” Father Triplett said. “It’s really a great joy seeing them together.”

Like all new parents, the Kleintanks face sleepless nights, regular feedings and soothing a crying infant.

Nathan already thinks about playing catch with his son and sending him off to college. Raising a child might not always be easy, but it’s a blessing that Nathan and Kate thank God for each day.

Kate cradled Joshua in her arms. She sees the world through transformed eyes now.