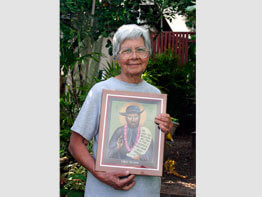 HONOLULU – In 1936, when Father Damien de Veuster’s remains were put on a ship in Honolulu to be sent back to his birthplace in Belgium, 8-year-old Audrey Horner lined up with fellow Catholic school students along the walkway to the wharf to bid aloha to the holy man.

Seventy-two years later, on April 29, Audrey Horner Toguchi received news that her healing in 1999 from cancer was officially attributed to the intercession of Blessed Damien.

Honolulu Bishop Larry Silva released Ms. Toguchi’s name for the first time when he announced that the theological consultors of the Vatican Congregation for Saints’ Causes had determined Blessed Damien was responsible for the unexplained healing.

The 19th-century Belgian missionary, a member of the Congregation of the Sacred Hearts of Jesus and Mary, spent the final 16 years of his life caring for patients with Hansen’s disease, or leprosy, on the Hawaiian island of Molokai. He was beatified in 1995 in Belgium by Pope John Paul II.

The action by the theological consultors is a major step toward his canonization. All that remains is the endorsement of the congregation’s committee of cardinals and bishops and the approval of the pope.

Ms. Toguchi, 79, is a lifelong Catholic who first learned about the heroic actions of Father Damien as a Catholic school student on Oahu. She taught in Hawaiian public schools for 44 years while raising two sons, Eric and Ivan, with her husband, Yukio Ms. Toguchi.

“In my mom’s mind and heart, this is someone who has given up a lot to come and help the people of Hawaii,” Eric said of Father Damien. “That kind of dedication endeared him to her.”

In late 1996, one year into retirement, Audrey suffered a fall after which her husband spotted a small lump on her left gluteal area. What she thought was a hematoma, or pooling of blood, kept expanding, and in December 1997, Ms. Toguchi consulted Dr. Walter Y.M. Chang.

“All these little things I had throughout life, I put in God’s hands,” she said in a May 1 interview with the Hawaii Catholic Herald, Honolulu’s diocesan newspaper. “I always tell him, ‘You created me and you know what’s wrong. Please help me.’“

She also would call on Blessed Damien when she needed help.

“When you have a friend like Father Damien, he’s going to intercede on your behalf,” she said.

Ms. Toguchi had asked Father Damien for prayers when one of her kidneys was removed in 1978. She did so again when the now-fist-sized lump on her side was removed in January 1998.

Ms. Toguchi asked her younger sister, Velma Horner, to pray that the mass was not cancer. Velma, Audrey and their other sister, Beverly Plunkett, then traveled to Kalaupapa to pray at Blessed Damien’s grave site and attend Mass at nearby St. Philomena, the church the priest had built.

Meanwhile, tests determined Ms. Toguchi’s tumor was an aggressive and rare form of cancer of the fat tissues. More tissue was removed and she underwent radiation. However, scans in September 1998 found three new lumps on her lungs. Doctors gave her less than six months to live.

“It was like the doctor told me about someone else,” Ms. Toguchi said. But she thought, “Father Damien, you’re not going to let me go.”

Dr. Chang thought chemotherapy might help. He remembered her response: “She calmly replied, ‘No, I’m going to pray to Father Damien.’“

Ms. Toguchi’s husband said the cancer “was really a devastating blow” and that he and his sons pushed for chemotherapy. But they also supported Audrey’s decision to make another pilgrimage with her sisters to Molokai.

In October 1998, Ms. Toguchi went back to Dr. Chang. New X-rays showed that her lung tumors had begun to shrink.

Dr. Chang asked her if she had tried acupuncture, taken herbs or seen another doctor. The answer was no.

“You never think that a cancer that aggressive is going to disappear,” Dr. Chang said. In fact, he believes Ms. Toguchi is the only documented case where this kind of cancer has “spontaneously regressed,” or gone away, without any treatment.

Two more X-rays revealed further shrinkage until scans in May and August 1999 could find no sign of the cancer.

Dr. Chang documented Ms. Toguchi’s case in the October 2000 issue of the Hawaii Medical Journal. He also encouraged Ms. Toguchi to report her healing to the Catholic Church.

“Even as cynical as doctors sometimes are, they have to admit with a case of spontaneous regression that it’s remarkable,” he said.

In March and April 2003 the Diocese of Honolulu convened a tribunal to investigate a possible miracle. On Oct. 18, 2007, the Vatican congregation’s medical commission ruled the healing as “unexplainable according to available medical knowledge.”

The postulator for Father Damien’s cause, Sacred Hearts Father Bruno Benati, wrote on his order’s Web site May 3: “Now it can be stated that what we have referred to till now as an ‘extraordinary cure’ is a miracle of God through the intercession of Blessed Damien.”

The sainthood process generally requires two miracles, one for beatification and one for canonization.

Ms. Toguchi also hopes that Father Damien’s becoming a saint will motivate others. “If this canonization happens and it lifts the spirits and souls of all those people that are downtrodden, (the long process) is worth it,” she said.