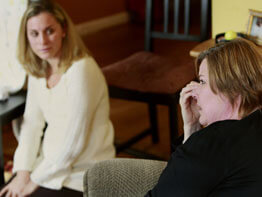 SILVER SPRING, Md. – Cubby LaHood will never forget the news her doctor told her 20 years ago.

Mrs. LaHood, then 13-weeks pregnant with her second child, was told her unborn baby had several fatal abnormalities and would likely die within one week after birth. She was advised – in the best interest of the baby, herself and her family – to terminate the pregnancy.

Mrs. LaHood and her husband, Dan, devastated by the news, sought more advice.

A priest simply told Dan LaHood “You know what to do,” while handing him an image of St. Joseph. That small picture is now on the LaHoods’ mantle along with dozens of family pictures in the couple’s Silver Spring home. He said the priest’s words “set us on the path we’ve been on ever since.”

“Once you’ve made a pivotal choice, God sends his minions to help you. It’s scary, but someone else helps you keep going,” he said Jan. 30 during an interview with Catholic News Service at their home.

One person was a Jesuit priest at Georgetown University Hospital. The priest, a nurse at the hospital, caught Dan LaHood when he fainted during the delivery and baptized their child, Francis, immediately after he was born.

Francis was alive for just a few minutes before he died of kidney complications. He died in his parents’ arms as they held him, sang to him, spoke to him and cried. His 3-year-old brother, Joe, was also in the room.

As hard as that experience was, Dan LaHood said without hesitation that it “changed our lives completely.”

This is from a man who had already been no stranger to living out his faith. Since 1983, he and his wife opened their home to care for disabled children on weekends, before and after school and during school vacations through a nonprofit program called St. Joseph’s House.

The LaHoods, who have three other children, ranging in age from 10 to 24, became Lay Missionaries of Charity 17 years ago. They are currently parishioners at St. John the Evangelist Church in Silver Spring.

After the death of their son, Cubby LaHood began attending a hospital support group for those suffering miscarriages, infant deaths and stillbirths. Through the program she met Nancy Mayer-Whittington, whose daughter, Angela, also died just minutes after birth. Her experience is recounted in the 2007 book “For the Love of Angela.”

The two women agreed that getting support after their ordeal was important, but said they would have benefited from having someone to talk to once they learned of their baby’s diagnosis. In 1994, the women started a group to do just that. The support group they formed is called Isaiah’s Promise, based on the passage from Isaiah that says, just as a mother cannot forget her child, neither can God.

Similar groups nationwide include Be Not Afraid, www.benotafraid.net, which teamed up two years ago with Elizabeth Ministry International, www.elizabethministry.com, a Catholic group that supports parents who receive difficult news from prenatal screening, testing and diagnosis.

The women with Isaiah’s Promise receive a handful of phone calls each year from Catholics and non-Catholics alike and many from women who are undecided about how to proceed with the diagnosis they have received. Some ultimately choose to have abortions, Mrs. LaHood told CNS.

For those couples who decide to carry their children to term, Ms. LaHood and Ms. Mayer-Whittington are prepared to walk with them every step of the way – listening and encouraging them to think through exactly how they want the birth experience to be. They encourage couples to consider who they want in the room with them, if they want pictures and if they want the baby baptized.

Last year, two women who contacted Isaiah’s Promise were Trish Stone from Kensington and Amy McDade from Baltimore. Both women had been advised by their doctors to consider having abortions.

Mrs. Stone, expecting twins, learned that one twin had hydrocephalus, a condition that causes increased fluid pressure in the brain. She was advised to consider “selective reduction” and focus on the healthy twin, an option which she and her husband rejected.

Mrs. McDade learned during a routine sonogram that the baby she was carrying had a rare genetic disorder called trisomy 18 that frequently results in death either before or immediately after the child is born.

Mrs. McDade, blindsided by the news, initially did not want outside help, saying instead that she and her husband, John, parishioners at St. Benedict in Baltimore would “figure this out.”

When they realized there was more to figure out than they had imagined, the couple met with Mrs. LaHood and Mrs. Mayer-Whittington who encouraged them to prepare for as much as they could control.

Mrs. LaHood, along with McDade’s parents and sister and brother-in-law were in the room for Nancy Ann’s birth and baptism Dec. 9. In the nine hours Nancy Ann lived she was held and admired by family members.

“We said everything we wanted to say to her,” Mrs. McDade said, still amazed at the calmness that surrounded them in the midst of such sadness.

Although Mrs. McDade has not been able to look at the pictures yet, she said she is glad to have them to remember her daughter.

“How does someone live through something like this?” Mrs. McDade asked. Responding to her own question, she said that she is “still not sure.” She said she has had to rely on her faith but “it’s hard.”

The funeral Mass for Nancy Ann was Dec. 20.

“Her life was short but it was real and we loved her,” said Mrs. McDade.