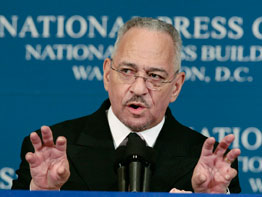 WASHINGTON – A spate of public appearances by the Rev. Jeremiah Wright, who until February was pastor of Chicago’s Trinity United Church of Christ, is drawing unprecedented attention to the black church as a whole, in addition to the specific congregation where Sen. Barack Obama is a member.

But who fits into what Rev. Wright describes as the “black church” is itself open to interpretation across racial, sociological, cultural and religious lines.

Rev. Wright first came to national attention a few months ago as excerpts of some his sermons were used to suggest that Sen. Obama, a Democratic candidate for president, must agree with some of the more sensational comments by the minister by virtue of their relationship.

The excerpts include Rev. Wright espousing the notion that HIV was created by the government as a form of genocide against blacks and saying that the 2001 terrorist attacks on the United States were the price of U.S. actions against other countries.

In a lengthy interview on the PBS TV show “Bill Moyers Journal” April 25 and in an address April 28 at the National Press Club, Rev. Wright described the controversy over his preaching as an attack on the black church, not an attack either on himself or on Sen. Obama.

“This is not an attack on Jeremiah Wright,” Rev. Wright said in a wide-ranging, sometimes emotional talk at the press club. “It has nothing to do with Sen. Sen. Obama. It is an attack on the black church launched by people who know nothing about the African-American religious tradition.”

He said he decided finally to respond to the comments to defend his church, specifically, what he defined as “the prophetic tradition of the black church,” which has its roots in God’s admonition to the prophet Isaiah to “preach the Gospel to the poor and to set at liberty those who are held captive.”

Rev. Wright said the “prophetic theology” of the black church was a theology of liberation in the days of black slavery. “It was preached to set free those who were held in bondage spiritually, psychologically and sometimes physically. And it was practiced to set the slaveholders free from the notion that they could define other human beings or confine a soul set free by the power of the Gospel.”

Later, he said, “the prophetic theology of the black church during the days of segregation, Jim Crow, lynching, and the separate-but-equal fantasy was a theology of liberation.”

“It was preached to set African-Americans free from the notion of second-class citizenship, which was the law of the land. And it was practiced to set free misguided and ‘miseducated’ Americans from the notion that they were actually superior to other Americans based on the color of their skin.

“The prophetic theology of the black church in our day is preached to set African-Americans and all other Americans free from the misconceived notion that different means deficient,” he said.

That means black music, black worship and black preaching should be respected as different from European music, worship or preaching, he said. “Being different does not mean one is deficient.”

A Chicago Catholic priest, Father Michael Pfleger, whose St. Sabina Parish is in the same South Side area as Trinity United, said after the press club event, which he also attended, that Rev. Wright’s remarks about the “black church” would resonate with his parishioners.

He said the Catholic Church might be a bit better than some denominations at recognizing its own history of racism but that it also has to embrace differences of culture.

Precious Blood Father Clarence Williams, senior director of racial equality and diversity initiatives for Catholic Charities USA, told Catholic News Service April 29 that while Rev. Wright’s depiction of the black-church experience would be familiar to some black Catholics “the black church is not monolithic.”

He explained that Rev. Wright and Father Pfleger have churches in the part of Chicago that gave rise to the Black Panthers in the 1960s as well as to less dramatic sorts of community organizing that worked to improve living conditions for the neighborhood. These days, it’s home to upwardly mobile, well-educated, articulate people who speak out on all sorts of issues, he said.

Many other blacks in the United States are involved in churches, both Protestant and Catholic, that are quieter, more restrained and traditional, said Father Williams. Those churchgoers “would not identify with Rev. Wright’s depiction,” he said.

Nor would African immigrants, whose church experiences would be dramatically different from either of the other two groups of black Christians, he added.

The day after Rev. Wright’s appearance in Washington, Sen. Obama said he was outraged and saddened by what his former pastor said in his recent public appearances. Previously, Sen. Obama had said that, while he disagreed with some things Rev. Wright said, he would no more disown the pastor than he would his own white grandmother, who herself has been known to make racist comments.

“What became clear to me was that he was presenting a worldview that contradicts what I am and what I stand for,” Sen. Obama said.