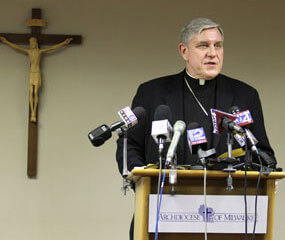 ST. FRANCIS, Wis. – A year to the day after his installation as the 11th archbishop of Milwaukee, Archbishop Jerome E. Listecki announced Jan. 4 that he had directed archdiocesan attorneys “to file a petition for a Chapter 11 reorganization of its financial affairs under the U.S. Bankruptcy Code.”

The archbishop said in a letter to the Catholic community and at a news conference at archdiocesan headquarters in St. Francis that Chapter 11 reorganization is the best way to achieve two goals.

“First, we want to do as much as we can, as fairly as we can, to compensate victims/survivors (of clergy sex abuse) with unresolved claims – both those with claims pending and those who will come forward because of this proceeding,” he said. “Second, we want to carry on the essential ministries of the archdiocese so we can continue to meet the needs of our parishes, parishioners and others who rely upon the church for assistance.”

The reorganization makes it possible for the archdiocese to use its available funds to compensate victims/survivors with unresolved claims “in a single process overseen by a court, ensuring that all are treated equitably,” according to the archbishop.

“In addition, by serving as a final call for legal claims against the archdiocese, the proceeding will allow the church to move forward on stable financial ground, focused on its Gospel mission,” Archbishop Listecki wrote.

While emphasizing that the archdiocese will continue to provide outreach to victims/survivors, the reorganization should bring closure to the financial burden the pending lawsuits would have placed on the archdiocese, according to Mark Doll, chairman of the Archdiocesan Finance Council.

“This can restart the archdiocese with a new vision going forward,” he said. “The way it was going, it was difficult to see an end in sight.”

Doll noted that when mediation failed, Chapter 11 reorganization appeared to be the only remaining option for the archdiocese.

“The mindset of victims’ legal counsel coming after the archdiocese had big thoughts of big payoffs; it got to the point where it seemed inevitable that we would end up in this place,” he said.

Archbishop Listecki wrote that, since the late 1980s, the archdiocese had worked “to meet the needs of victims/survivors without taking this drastic action (Chapter 11 reorganization).”

“We have directed increasing resources toward providing financial, psychological, pastoral and spiritual support to victims/survivors. … We have spent more than $29 million to cover costs associated with this tragedy,” the archbishop said.

Since 2002, the archdiocese has sold property, liquidated savings and investments, eliminated ministries and services, cut staff by nearly 40 percent, and put all available real estate on the market in order to provide resources.

“As a result, we have succeeded in reaching mediated settlements with more than 190 individuals,” Archbishop Listecki said. “But in the end, our available resources fell short.”

“Archbishop Listecki, as did Archbishop Dolan, realized that the way things were trending, it (bankruptcy) was probably inevitable. We gave it the best effort by going to arbitration, but when the dollar numbers on individual settlements continued to go up, it became clear to us for some time that there may be no other choice,” he said.

Father John Yockey, pastor of St. Jerome Parish in Oconomowoc and a member of the archdiocese’s college of consultors, said that group was not surprised by the possibility of Chapter 11.

“All of us had seen handwriting on the wall for some time. While we’re not lawyers or professional accountants, all of us could do the simple math – if the final mediation ($4.6 million offered to 16 victims/survivors in November) was rejected, there really wasn’t any other alternative,” he said.

“We reached a point because of the horror, the sexual abuse tragedy, where we cannot carry on financially under the present demands,” he said. “We’re seeking a legal reorganization that will fairly allow us to take care of our temporal responsibilities. Having done that, we can turn the corner and move into a new chapter in history of the archdiocese.”

All of the archdiocesan high schools are separate corporations, too. While some have long-term leases with the archdiocese, these will not be affected by the reorganization filing.

Information provided by the archdiocese notes, “The property currently carries a $4.65 million mortgage, which was taken out in 2006 to help pay the archdiocesan portion of a resolution of lawsuits filed by victims/survivors in California.”

As for assets, a statement from the archdiocese said, “We have, and will continue to maintain, an open-book policy when it comes to our finances.”

The audited financial statement for the fiscal year ending June 30, 2010, showed total assets of $98.4 million, but more than $90 million of that is restricted by donors for designated purposes or are offset by corresponding liabilities.