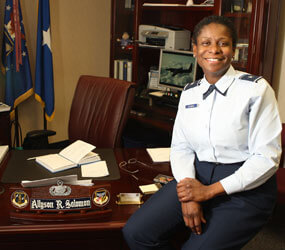 In becoming both the first woman and first black to attain that rank, Solomon acknowledges a debt to the Catholic schools in Baltimore that educated her: Blessed Sacrament School, the Institute of Notre Dame and what is now Loyola University of Maryland.

None of that would have been possible, however, if not for another Catholic link, albeit from an unlikely origin: Hollywood.

Solomon, who turned 49 Jan. 23, was 10 when she left her native Trinidad and Tobago in the Caribbean, following a path blazed by her mother.

“My mom was the first in my family to come to the U.S.,” Solomon said. “She was a very talented seamstress, and had worked on a movie that was filmed in Trinidad and Tobago. The actress knew a woman who owned a dress-making shop in Towson. The woman needed a seamstress, and sponsored my mother here.”

The movie was a 1957 classic, “Heaven Knows Mr. Allison,” set in the Pacific theater during World War II and starring Robert Mitchum and Deborah Kerr – who played a nun.

After Solomon moved to Baltimore as a girl, the nuns at Blessed Sacrament loved her use of the king’s English.

“In Trinidad and Tobago, you go to school based on your religious affiliation,” Solomon said. “Our family grew up in the Catholic faith, and that’s all my parents knew when we moved here.”

At IND, Solomon participated in dance and cheerleading. A month before graduation, she enlisted in the Maryland Air National Guard, familiar with the concept of chain of command.

“I’ve talked to others who have Catholic school or private school experience,” Solomon said. “When people say, ‘Do,’ you do. When you join the military, there’s not much of a transition there. You accept the fact that there are lines in which you exist.

“That doesn’t necessarily mean that you agree or that you like it, but you know, ‘This is what I need to do.’ ”

Home from basic training, Solomon considered three local colleges. She walked to the one nearest her home, Loyola, toured the campus and enrolled that same day.

While earning a business administration degree, Solomon worked in a bank and re-enlisted for another three-year stint with the Maryland Air National Guard.

She was commissioned as an officer in 1986.

Solomon’s initial 1979 commitment was for “two weeks (every summer), one weekend a month.” In early January, she oversaw the deployment of more than 300 men and women in the 104th Expeditionary Fighter Squadron from Martin State Airport to Afghanistan, temporary duty ranging from 45 days to four months.

“Sending a person off to a place they might not come back from,” Solomon said, “that’s a humbling responsibility. That is my job.”

“I say this to my folks all the time, service is a privilege. Not everybody gets to do this, you either qualify or you don’t. … It really is a privilege to wear the uniform every day and give something back to your state and nation.”

Solomon never forgets that her Maryland Air National Guard uniform is not the first she wore.

“For me,” Solomon said, “the focus of my Catholic school education, it’s not about what uniform you wear, it’s about who you are while you’re wearing it. That’s something I understood, whether it was at school, home or even here in the military.

“That’s a foundation you don’t stray from.”