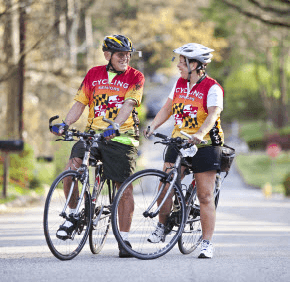 SEVERNA PARK – John Buchleitner shows off his warped silver bike helmet with a wily grin, one that says he has a sense he cheated death by wearing it. Six years ago, he was going 25 mph down a hill in Arizona when he lost control of his bike. Today he uses the busted helmet as a teaching tool for other riders.

Still, at 75, John Buchleitner shows no signs of slowing down. He rides 30 to 50 miles alone once or twice per week, and on weekends often joins a group of cycling seniors with his wife, Barbara, who is 63.

Although the couple mainly cycles on Baltimore and Annapolis Trail and other roads and trails near their home in Severna Park, they participate in an annual 424-mile ride in Florida. They’ve also pedaled between Nogales, Mexico, and the Canadian border; on a month-long tour of Italy’s fortified hill towns; and on numerous rides across the United States, including one that took them across San Francisco’s Golden Gate Bridge.

All of the long rides have been with groups, which is what makes cycling fun, Barbara said. The Buchleitners’ packed photo album includes shots of them dancing at a festival in Ravenna, Italy; hand-feeding a deer along their route in Florida; and standing arm-in-arm with other riders on a break at Arizona’s Slide Rock, a natural water chute.

“As you get older, you change your focus on fitness,” Barbara said. “It’s not competitive any more. It’s to feel good, to do things and have fun. Because biking is fun.”

The couple didn’t start cycling until 10 years ago, after John had retired from an electrical engineering career at Westinghouse. They bought cheap bikes but soon realized their deepening interest in the activity required equipment upgrades. Today, John has three bikes, and Barbara one, but she changes the tires to adapt to the ride.

Barbara says she’s never been an athlete, but likes to get exercise. Cycling was easy to get into for the couple, and they’re convinced almost anyone could rapidly build endurance for longer rides. Still, Barbara jokes that there’s not a hill she hasn’t walked up in Italy, where she walked her bike on the tougher inclines. And when the couple bikes with a group, John is always at the front, “a mile ahead” of Barbara, she said.

She doesn’t mind, she said, because it means she can bike with others who go at her pace. Some of the Buchleitners’ group rides have 50 cyclists, so there’s room for people of varying experience and speeds. John and Barbara are members of the Baltimore Bike Club and regularly bike with Baltimore-based Ateaze Senior Center’s Cycling Seniors group, which hosts rides they rates from “casual” to “aggressive.”

“Any given weekend in the Washington, D.C.,-area you can find a weekend ride. You can show up and be with a large group of people,” John said.

“People don’t realize how biker-friendly Maryland is,” Barbara added, pointing to the trails that wind near the Chesapeake Bay, link Annapolis to Baltimore, and follow the Chesapeake & Ohio Canal and then the Great Allegheny Passage Trail from Washington to Pittsburgh.

Biking gives the Buchleitners access to easily-missed towns and historic sites, John said, citing a recent trip through bayside Bowleys Quarters in eastern Baltimore County. It also feeds their interest in geology; it’s not unusual for John to collect rocks along the ride.

Members of St. John the Evangelist in Severna Park, the Buchleitners have a theory on aging. They’re convinced physical and social activity can ward off the depression they sometimes see in other seniors.

Barbara works for the Anne Arundel County Department of Health’s Aging and Disabilities Services, and thinks some of the seniors she encounters would be physically and mentally healthier if they embraced an activity such as cycling.

For John, the answer to staying active is “just to keep putting one foot in front of another.” In addition to cycling, John is an avid fisherman and also plays hockey with other seniors on the “Gerihatricks,” a pun-named team based in Laurel.

When Barbara retires, the couple hopes to return to Europe with their bikes, although the days of camping along the route – like they did on their Mexico to Canada ride in 2004 – are over, they said.

It’s not just the exercise or the endorphins that come from pumping up a hill – it’s also the camaraderie that will keep the Buchleitners in their bike saddles for years to come, they said.