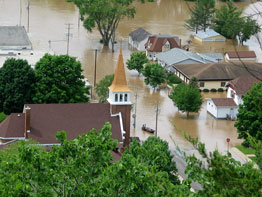 WASHINGTON – Parishes in Iowa, Wisconsin and Indiana escaped serious damage after several rounds of storms June 7-8 brought record flooding and devastating tornadoes to large swaths of the Midwest. Some homeowners, however, were not as fortunate.

In the southern part of the Diocese of La Crosse, Wis., where the Kickapoo River rose over its banks for the second time in 10 months, the towns of Gays Mills and Soldiers Grove were among those hardest hit. While residents had plenty of warning from the National Weather Service and were able to escape, dozens of homes were underwater June 12.

“When I went it was pouring rain,” he said. “Somehow something in the back of my head told me to go back home.”

Rather than take chances, he returned to the church June 9 to secure consecrated hosts and his possessions in case of flooding.

Since the August 2007 flood, the church has taken some precautions, including the installation of a shut-off valve that prevents sewage from backing into the church basement – as it did 10 months ago. Like many residents, the parish still was recovering from the last flood.

“I don’t know who is afflicted by this latest flood,” he said of the area which was deluged with as much as 10 inches of rain June 7-8. “But my heart goes out to everyone who is.”

Mary Fitzpatrick, director of emergency services for Catholic Charities of the La Crosse Diocese, said the organization had deployed volunteers in Vernon and Crawford counties, where the most serious damage was expected.

“It’s going to take awhile before we can figure out what’s best for a given area,” she told the Catholic Times, the diocesan newspaper, June 9. “But right now, Catholic Charities, the Salvation Army and the Red Cross are preparing to take in those affected by the flood.”

In Wisconsin Dells, 50 miles north of Madison, Wis., rising floodwaters in Lake Delton, a popular tourist destination, washed away a portion of an adjoining highway, causing the lake to completely drain. The rush of water washed away three homes and destroyed two others.

“The storm seemed to go on endlessly,” Monsignor Oehrlein said. “But everyone is optimistic, and we have a great tradition of going on.”

Two families from St. Cecilia Parish were among those who lost their homes in the Lake Delton flood, while several more had trees damage their houses, leaving them temporarily homeless, Monsignor Oehrlein said.

In nearby Janesville, a Catholic school reported water damage in a classroom from the storms. Matt Beisser, principal of St. Patrick School, told The Catholic Herald in the Madison Diocese that high winds caused the roof to peel back, exposing the building to the elements.

“We were planning on other school improvements, but not on the roof. Now we have to get a new roof,” he said.

In southern Indiana, at least two parishes opened their doors to flood victims.

St. Martin of Tours Parish in Martinsville was opened June 7 as a Red Cross shelter for flood victims.

Father John Hall, pastor, said about 100 people took shelter from 10 a.m. to 7:30 p.m. before leaving on school buses for another shelter.

“They lost everything,” Father Hall told The Criterion, newspaper of the Indianapolis Archdiocese. “They have nothing. They’re condemning buildings here now.”

Red Cross volunteers did most of the work at St. Martin of Tours. Father Hall was present to the flood victims as a way of living out “the Gospel message of walking with people in their time of need.”

After seeing to the physical needs of the flood victims who came to the parish, Father Hall said he offered their sufferings up during weekend Masses.

Flood waters rose rapidly later June 7 in Columbus, where Columbus Regional Hospital had to be evacuated.

Father Clement Davis, pastor of St. Bartholomew Parish in Columbus, said about 20 people who came to the parish’s 5 p.m. Mass and a concert afterward were forced to stay in the church’s lower level and the parish rectory. All roads in and out of Columbus were cut off by flood waters.

“I was glad that we had the space for them,” Father Davis said. “I felt badly that the guests from out of town were left to sit in our lower level, and we didn’t have anything very comfortable for them. But they were all just very grateful to be in some place.”

Meanwhile, Bishop Richard E. Pates of Des Moines, Iowa, asked parishioners to pray at Masses on the weekend of June 14-15 for the victims of the severe weather. In a June 12 statement, he asked for prayers particularly for the victims of a tornado at the Little Sioux Scout Camp in western Iowa.

Contributing to this story were Ben Emmel in Madison, Wis., Sean Gallagher in Indianapolis and Joseph O’Brien in La Crosse, Wis.