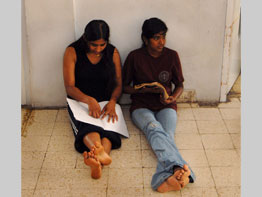 BEIRUT, Lebanon – The Middle East has become a magnet for young women from Asia and Africa who are lured by the promise of jobs. For many, however, employment comes at a steep price.

Women from Sri Lanka, the Philippines, Nepal, Ethiopia and Madagascar, some only teenagers, are recruited to work as maids for wealthy Lebanese families, said Najla Chadha, who directs the Caritas Lebanon Migrant Center in Beirut.

“They are forced to come because of poverty in their home country,” Ms. Chadha said.

But the trip often leaves them deeply in debt. One young Nepalese woman told Ms. Chadha that she had mortgaged her house and small farm plot to pay a labor recruiter about $3,000. The terms of employment may also change between the time the woman leaves her home and her arrival in Lebanon, leaving the worker at a disadvantage, Ms. Chadha said.

Because migrants begin with debts, it is difficult for them to send money home. The International Labor Organization is pushing for standards that would require that all hiring costs be paid by the employer, but countries have been slow to sign on, said Roger Plant, who heads the ILO’s special program to combat forced labor.

In Lebanon, the person seeking a maid also pays an employment agency. When the woman arrives at the Beirut airport, she is given a domestic worker’s visa – the only option for a woman seeking to immigrate – that includes her employer’s name, Ms. Chadha said. But instead of giving the passport back to the woman, the immigration officer hands it to the woman’s employer.

“They use that to keep their power over the migrant,” she said.

When an employer takes away a worker’s identity document, keeps her in debt bondage or withholds her wages, the job crosses the line into forced labor – when a worker is held by coercion and the threat of punishment or harm.

If they run away, breaking the terms of their domestic worker visa, their situation becomes illegal, making them an “easy target for traffickers,” Ms. Chadha said. Employers sometimes claim that the women stole from them and press charges, she said.

The Caritas Lebanon Migrant Center provides counseling and legal aid for women who have migrated to Lebanon. In the country’s detention centers it has staffers trained to assist migrant workers, about 85 percent of whom are women.

Caritas also distributes leaflets on immigrants’ rights, sponsors a media campaign and operates two hot lines – one for migrants and one especially for victims of trafficking.