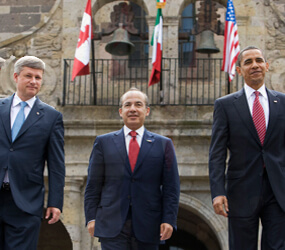 Speaking after the Aug. 9-10 meeting of Obama, Mexican President Felipe Calderon and Canadian Prime Minister Stephen Harper in Guadalajara, the advocates urged the U.S. leader to spend some of his “political capital” on immigration issues in the same way he is addressing the economy and health care reform.

“For Obama, it’s a promise, not a project,” said Father Pedro Pantoja, director of the Saltillo Diocese’s migrant shelter in northern Mexico, reacting to Obama’s comments. The priest acknowledged that economic conditions in the U.S. remained unfavorable for addressing immigration reform.

“We recognize that these are tough conditions, but he’s obviously not willing to spend his political capital on this matter,” she said. “We’ve heard promises before.”

But one priest, Father Luis Cobacame, spokesman for the Hermosillo Archdiocese in northwestern Mexico, questioned the wisdom of Mexicans lobbying for U.S. immigration reform. He said the Mexican government should tend to the social and economic needs in the marginalized regions of Mexico that force thousands of migrants northward instead of lobbying for immigration reform in the U.S.

Lobbying for immigration reform, he explained “has been a pretext for delaying development, mainly in education and the countryside. An economy has developed instead that is based on migration and remittances.”

At the conclusion of the summit, Obama said a system that offers strong border security and an orderly process for people to enter the U.S. was possible.

“But we’re also giving an opportunity for those who are already in the United States to be able to achieve a pathway to citizenship so they don’t have to live in the shadows,” Obama said.

Along with immigration, the three leaders also discussed helping Mexico’s police forces in an ongoing crackdown on organized crime, the economic crisis, possible outbreaks of the H1N1 virus and trade frictions.

Still, much of the attention at the summit – at least in Mexico – focused on immigration, including the July 13 Canadian decision to require visas for all Mexicans traveling to Canada.

Francine Garneau, spokeswoman for the Canadian Conference of Catholic Bishops, said the organization had no comment on the visa issue.

Despite the disagreement over the new visa rules, the Mexican and Canadian leaders agreed that other programs to facilitate orderly migration between Canada and Mexico would be expanded. One program, in existence for 35 years, takes Mexican agricultural workers to Canada each summer so they earn at least the provincial minimum wage and receive social benefits.