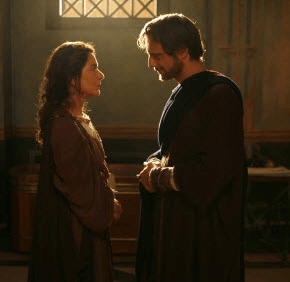 WASHINGTON – St. Augustine’s “Confessions,” the autobiographical account of his sinful youth and eventual conversion to Christianity, may be a centuries-old story but its message still resonates today, according to the head of Ignatius Press.

For the first time, a feature film – titled “Restless Heart” – will tell the story of the fifth-century doctor of the church’s journey to faith, said Mark Brumley, CEO of Ignatius Press.

“Catholics who have children who stray and leave the faith, or a spouse who is not Catholic … can learn from the example of St. Augustine,” Brumley said in a telephone interview with Catholic News Service.

St. Augustine of Hippo (A.D. 354-430) “was raised in a family situation where his mother was a Christian and his father was not. He was not baptized as a child. He went off to school and was exposed to many perspectives at odds with faith,” he said.

Later, after he converted to Christianity in 386 and was baptized, he “came to be a major figure,” Brumley said.

The title of the movie is taken from a famous quote of St. Augustine: “Thou hast made us for thyself, O Lord, and our hearts are restless until they find their rest in thee.”

The U.S. debut of the film was scheduled for Aug. 29 during the 2012 Catholic Marketing Network Trade Show at the Arlington, Texas, Convention Center, according to an Aug. 20 announcement from Ignatius.

Ignatius Press is working with parishes, organizations and individuals who want to arrange a screening of the film at a local theater or some other appropriate venue. Information about arranging a screening can be found online at www.restlessheartfilm.com.

“Restless Heart” is one of two films Ignatius Press is currently behind. The other is called “Cosmic Origins,” about the intersection of faith and science, which is being made available for showings in parishes and schools. Information for private screenings of “Cosmic Origins” can be found at www.cosmicoriginsfilm.com.

Either movie can be a fundraiser for parishes or groups, Brumley told CNS. Also, each can be a “faith raiser,” he noted, which can help people deepen their faith during Pope Benedict XVI’s Year of Faith, which starts in October.

Produced by an Italian public broadcasting station, “Restless Heart” was originally filmed in English as a miniseries and, with Ignatius Press as a partner, has made it to the U.S. as a full-length film.

“It is a truly inspirational film and I think people will be greatly moved,” Brumley said. “They will be moved and inspired by the story of St. Augustine.”

“Ignatius Press, for some time, has had the use of the media, especially film, as a way of evangelizing and teaching Catholics about their faith,” Brumley told CNS.

The other film, “Cosmic Origins,” brings together physicists from NASA, Harvard, Vanderbilt and Cambridge universities, and other well-known institutions.

They discuss the scientific evidence for God’s existence and his role in creating the universe, and counter the view some hold that faith and science are not compatible, according to the film’s executive producer, Jesuit Father Robert J. Spitzer.

A former president of Gonzaga University in Spokane, Wash., Father Spitzer is founder and president of the Magis Center of Reason and Faith in Irvine, Calif.

“There is nothing that points away from God” in science, the priest told CNS in a telephone interview. “There is evidence for a Creator from space-time geometry. … Without a Creator, you can’t have space and can’t have time.”

There is a “creative entity outside space and time itself. That’s hard to put our arms around, but we must … even as physicists,” Father Spitzer added.