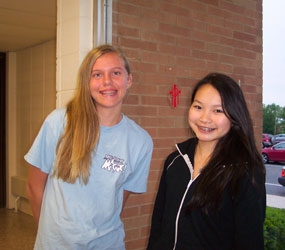 Mercy High School’s 50th anniversary service project, a year-long effort that culminated in a benefit concert at the school May 13, raised awareness about and funds to combat human trafficking.

Known as the NOW campaign – a nod to Sisters of Mercy foundress Catherine McAuley, who said, “The poor need help today, not next week” – the ambitious project started when four student representatives attended a four-day conference at Gwynedd-Mercy College in Pennsylvania in June 2010.

Seniors Brittany Baird and Caitlin McKay and juniors Caroline Buxenstein and Emily Schreiber learned leadership skills and then returned to Mercy to educate the entire school community about an issue chosen at the conference.

“When we threw out ideas, the one that we kept repeating was human trafficking,” Brittany said. “Here at Mercy, I don’t think students knew the details. I’ve definitely seen an increase in awareness.”

“Students thought it was a global issue and didn’t realize it happens right here in Baltimore, it happens in the United States,” Caitlin added.

Religious Sister of Mercy Carol Wheeler, Mercy High School president, noted the four presented the issue at an assembly for all students, to the faculty and staff at an in-service, to the alumni and the executive board, and to the fathers’ and mothers’ clubs at their respective meetings.

“Our trustees thought these kids were really awesome and are, they really are,” Wheeler said. “It’s not just fundraising; it’s educating people about this problem.”

But fundraising was equally successful because the initial four students persuaded other clubs, teams and student leaders to become involved.

“It just branches out to each club,” Caitlin said.

The Footlighters, a theatre arts group, donated a portion of ticket sales from the winter show; the athletic club donated ticket and concession sales from a faculty-student basketball game, and the student council enticed students to purchase the right to wear purple clothing and jeans to school.

The McAuley Club, which is dedicated to service, came up with the idea of a concert featuring local bands, which had to be approved by the activities committee.

“We went in there thinking, ‘Oh, they’ll never let us do this,’” Brittany recalled with a laugh. The school adopted security measures – the concert was not open to the public and students could only bring one guest – but agreed to allow the benefit.

“The hardest part was getting bands lined up, but students spread the word and used personal connections. Three local bands – Storm The Beaches, The Rapdragons and Me and My Army – agreed to play for free.

The money – which will be combined with fundraising efforts from Sisters of Mercy high schools across the country – will go to Mercy safe houses. At the Gwynedd-Mercy conference, Religious Sister of Mercy Deirdre Mullan, director of Mercy Global Concern at the United Nations, taught about safe houses and how they work.

“I think people are really putting their hearts into it this year,” Caitlin said. “We couldn’t have asked for a better reaction.”

“These girls have done a remarkable job speaking to assemblies,” said Principal Pegeen D’Agostino. “It was a matter of information as well as money.”

Sister Carol noted that all of the students were pleased to be part of an international system of schools while focusing on a global issue.

“It expands our students’ awareness of the whole world, not just their little corner of the world,” she said. “They’re citizens of the world.”