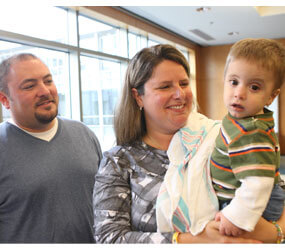 Nineteen-month-old Mason Shaffer has no qualms about somersaulting off a couch in his family’s Pennsylvania home. He’s equally fearless when exploring new surroundings or playing a spirited round of peek-a-boo with his mother.

It’s a far cry from a year ago when Mason couldn’t even sit up or rollover. Afflicted with malignant infantile osteopertrosis, a rare bone disease, Mason was severely underdeveloped and in significant pain. His life was saved through a transplant of adult stem cells obtained from umbilical cord blood donated to a public collecting bank.

The Shaffer family was on hand at Baltimore’s Mercy Medical Center during an Oct. 11 press conference to celebrate the establishment of Maryland’s first public umbilical cord blood banking program. Organizers believe it has the potential to save the lives of many children and adults like Mason.

Through the program, women giving birth at Mercy will be given the option of donating their babies’ umbilical cord blood to be listed on the National Marrow Donor Program registry for use by patients in need of life-saving transplants. Community Blood Services of New Jersey will receive the donated cord blood and bank it for future use throughout the country and around the world.

Adult stem cells contained in the blood can be used to treat more than 90 diseases, including many types of cancers and blood disorders.

Archbishop Edwin F. O’Brien said the launch of the program represents a “day of hope for God’s people who may be suffering from life-threatening or debilitating diseases.”

“Allowing parents to make the harmless and life-giving donation of their baby’s umbilical cord blood fits beautifully with Catholic hospitals’ mission of providing life-affirming health care,” he said, noting that St. Agnes Hospital in Baltimore is soon to become the second hospital in Maryland to collect umbilical cord blood.

Thomas R. Mullen, Mercy’s president and CEO, said there are tens of thousands of people around the world who need stem cell transplants. Last year, the National Marrow Donor Program was able to facilitate about 5,000 transplants worldwide.

Mullen said a major goal of his hospital’s involvement in the partnership is to increase the number of cord blood donors who are African-American and who are underrepresented in the donor population.

“One of the great things about this (is that) we can target particular groups of people out there and hopefully get rid of the disparity we have in finding donors,” he said.

Sickle cell disease occurs in about one in every 500 African-American births.

Nancy Paltell, associate director for the Respect for Life department of the Maryland Catholic Conference, said approximately 80 percent of the births at Mercy and St. Agnes are to African-American families.

Maryland families currently have the option of privately collecting umbilical cord blood, but few take advantage of it because of the expense – $2,000-$3,000.

“In terms of the humanitarian effort and doing the most good for the most people, we really want to encourage people to donate it to that public bank,” Paltell said.

The Maryland Catholic Conference was a driving force behind establishing the partnership between Mercy and Community Blood Services. Paltell said her next goal is to find other banks to work with other Catholic hospitals in the state. There are 18 public banks in the country.

“I am just so excited when I think of the number of lives that will be saved,” she said. “We hope the non-Catholic hospitals will come on board soon. We’re just hoping it’s going to continue to snowball.”