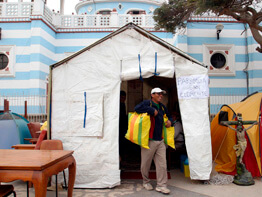 PISCO, Peru – When Carlos Cortez arrived in Pisco days after the city was struck by a magnitude 8 earthquake, he was particularly struck by the children in one of the tent cities set up for people who had been left homeless.

Cortez, a member of a mental health team from the Pontifical Catholic University of Peru in Lima, took that as a challenge.

He started by organizing a pickup soccer game with some teens. A handful of youngsters wandered over, curious, and he saw his chance, sweeping them up into a conga line to play “train,” winding up and down the rows of tents that will be their home for months.

More kids joined the train, which led to a round of Simon Says, other games and art sessions.

In the wake of the disaster that struck the towns of Canete, Chincha, Pisco and Ica, along the Panamerican Highway about 150 miles south of the Peruvian capital of Lima, children are struggling to adapt to a new way of life.

“There’s no one to explain to them what’s going on,” said Monica Cassaretto, a psychology professor at the university and head of the mental health team. “They’ve witnessed not only the earthquake, but also their parents’ reactions.”

And the parents are afraid.

In most of the region affected by the earthquake, classes have been suspended while officials inspect schools and set up prefabricated classrooms where necessary. The Ministry of Education estimates that 80 percent of schools in the region have been affected and about 35 percent of those are unsafe because of structural damage.

In the rural village of Humay, “people who live across the river don’t want to send their children” back to school in the village, said Aurora Ancaya, who assists with parish activities.

“They’d rather have them close by” in case another disaster strikes, she said.

Major aftershocks have become infrequent, but when there is a strong jolt parents instinctively grab their children. Fear is further fanned periodically by newspaper and television headlines warning of more tremors or a tsunami.

“They keep showing images of the disaster,” said Edgar Sanchez, a catechist in Independencia. “They’re making the kids afraid.”

Parents also worry about their children’s health. In rural villages, people whose homes have collapsed – and those who fear that cracks have made their houses unsafe – have fashioned makeshift shelters of straw mats or sheets of plastic, rice sacks and blankets hung over bamboo frames. Although the days are warm in the southern desert, nights are chilly, and August is the month of the cold southern wind known as the “Paracas,” which bites through the flimsy structures.

“A lot of the kids have colds,” said Rosana Lujan, a catechist in Independencia who teaches preschoolers in the rural community of Dos Palos.

So far, statistics show the incidence of respiratory illnesses is normal for this time of year, according to Ministry of Health epidemiologists who are monitoring the earthquake zone. They worry, however, that colds or parasites that cause diarrhea could spread through the several dozen tent camps that have been set up around Pisco to house the thousands of families who have been left homeless.

At least five of the tent camps have between 3,500 and 5,000 residents, said Dr. Oswaldo Cabanillas, who coordinates the epidemiology team in Pisco.

While the camps have water cisterns and chemical latrines, they need more permanent toilet facilities, a good waste disposal system and careful attention to hygiene in the communal cooking areas to protect the health of children and parents, Cabanillas said.

In the meantime, Cassaretto said, people will need to overcome their fears. The university team plans to work in several camps for five weeks, but recovery will take much longer.

As Cassaretto surveyed the rows of square tents in the camp, a group of children played ball near a clothesline, and a woman dressed as a clown was mobbed by small kids who tugged at her hands and hugged her.

“At least you see them smiling now,” Cassaretto said.